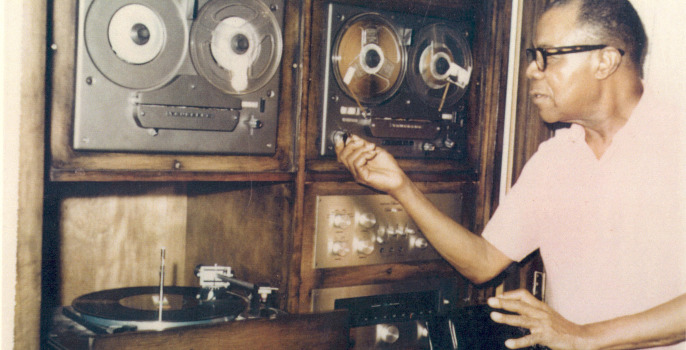 on November 11 | in About, Culture, Vintage | by Boo Paterson | with 7 Comments

Music legend Louis Armstrong is recorded on secret tapes talking about being busted for smoking pot, and telling his manager he will refuse to play unless he fixes it so he can smoke as much as he wants without going to jail.

The tapes were recorded by Armstrong himself on a reel-to-reel recorder at his home in Corona, Queens.

From December 1950, until his death in 1971, Louis documented his life ‘for posterity’ on to 750 tapes, totaling thousands of hours of recordings, now owned by Louis Armstrong House Museum.

He tells dirty jokes, rails against racism, practices his trumpet, and fights with his wife. And he talks at length about his regular marijuana use.

FUN…Armstrong hanging out with friends. He says that smoking joints helped him relax and that it was ‘medicine’

This week, NYPD announced that they would stop arresting citizens for misdemeanor marijuana possession, instead issuing them with a $100 fine. But Armstrong had very different experiences with the cops, and was angry about being criminalized for what he considered to be a harmless way to relax.

“We always looked at pot as a kind of a medicine, ya know,” Armstrong says. “And we had much better thoughts than one that’s full of lush – meaning liquor.

“I, for one, had to put it down ‘cause the law commenced to gettin’ heavier and they fell for that crap that gage is dope, ya know, and all that shit. But the respect for gage will stay with me forever. I have every reason to say these words and I am proud to say them from experiences, if no more. I’ll relate a few incidents for you.

“On the west coast of California in 1931, when Vic Burton – the top drummer in all of Hollywood – and I got busted together, it was during our intermission at this big night club which were packed and jammed every night with all sorts of my fans, including movie stars. 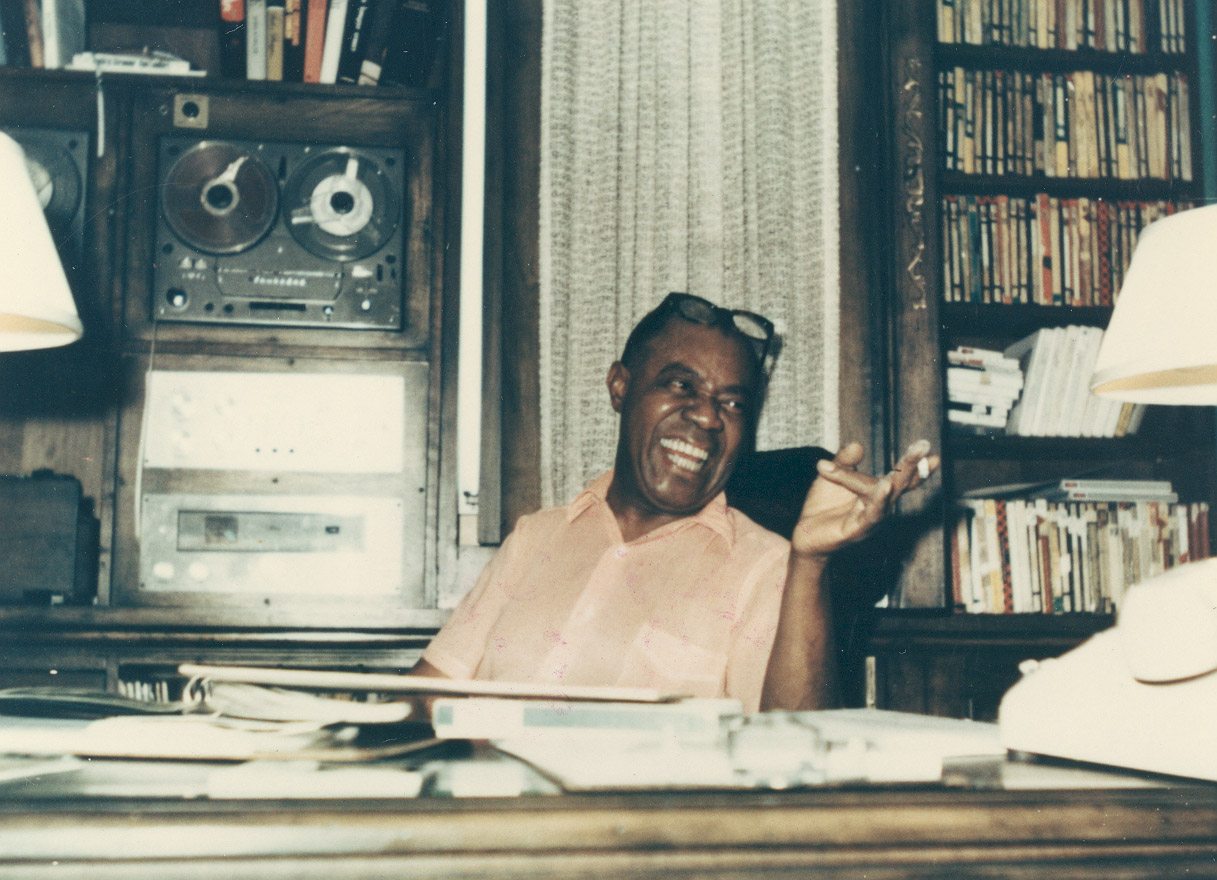 POPS’ POT…Armstrong smoking in his den at his house in Corona, Queens, surrounded by his recording equipment

“Anyway, while Vic and I were blasting this joint, having lots of laughs and feelin’ good, enjoying each other’s fine company, we were standing in this great big lot in front of some cars. Just then, two big healthy dicks (detectives that is) come from behind a car nonchalantly and say to us ‘We’ll take the roach boys’. Mmmm! Vic and I said nothin’.

“So one dick stayed with me until I went into the club and did my last show. He enjoyed it too, because, when he and I were on our way down to the police station, he and I had a heart-to-heart talk.

“The first words that he said to me were ‘Armstrong, I’m a big fan of yours and so is my family. We catch your programs every night over the radio. In fact, nobody goes to bed in our family until your program’s over. And they’re all great’ – which I was glad to hear especially coming from him.”

But despite the cop’s flattering words, Armstrong still feared he would be roughed up. 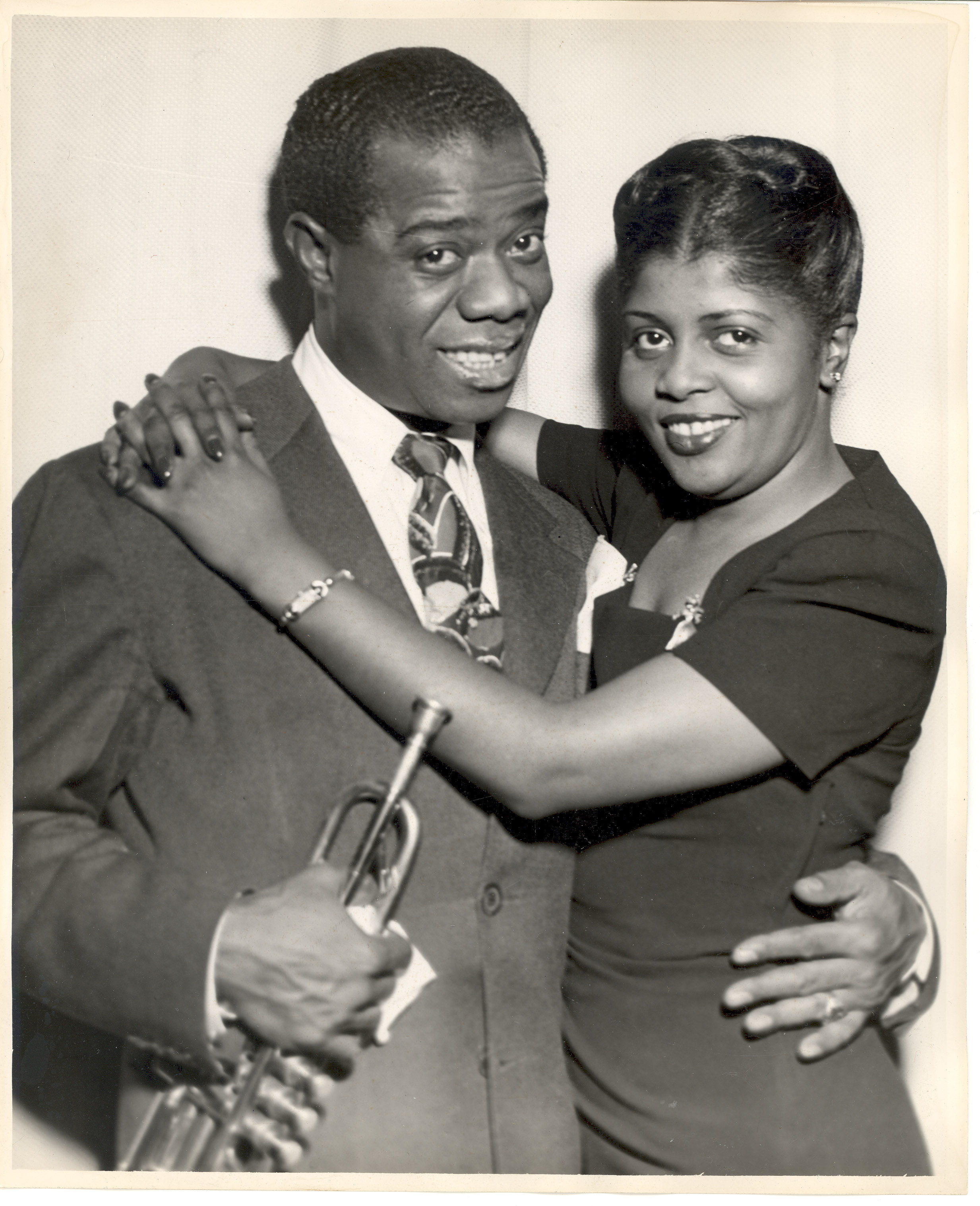 LOVE…Armstrong and wife Lucille, who was fined for possessing marijuana

He continues: “Then I confidentially told him these words – ‘Since you and your dear family are my fans, they’d be awfully sad, awfully sad, if anything drastic would happen to me, the same as the other thousands of my fans. So please, don’t hit me in my chops’.

“When he said to me, ‘Why, I wouldn’t think of anything like that,’ that’s all I wanted to hear. He said ‘You ain’t doin’ any more than anybody’s doin’. Everybody’s out there doin’ something. It’s when they get caught is when they really found out’.”

The cop told him that a rival bandleader – jealous of Armstrong’s bigger audiences – tipped off the police that the trumpeter was smoking pot.

Armstrong said: “This dick confidentially told me, he said ‘When that cat called us and stool-pigeoned on you, they sent me and my partner to come up for the assignment…when we found out that you was the one that we must nab, it broke our hearts. You must understand, we can get you six months for a roach’. 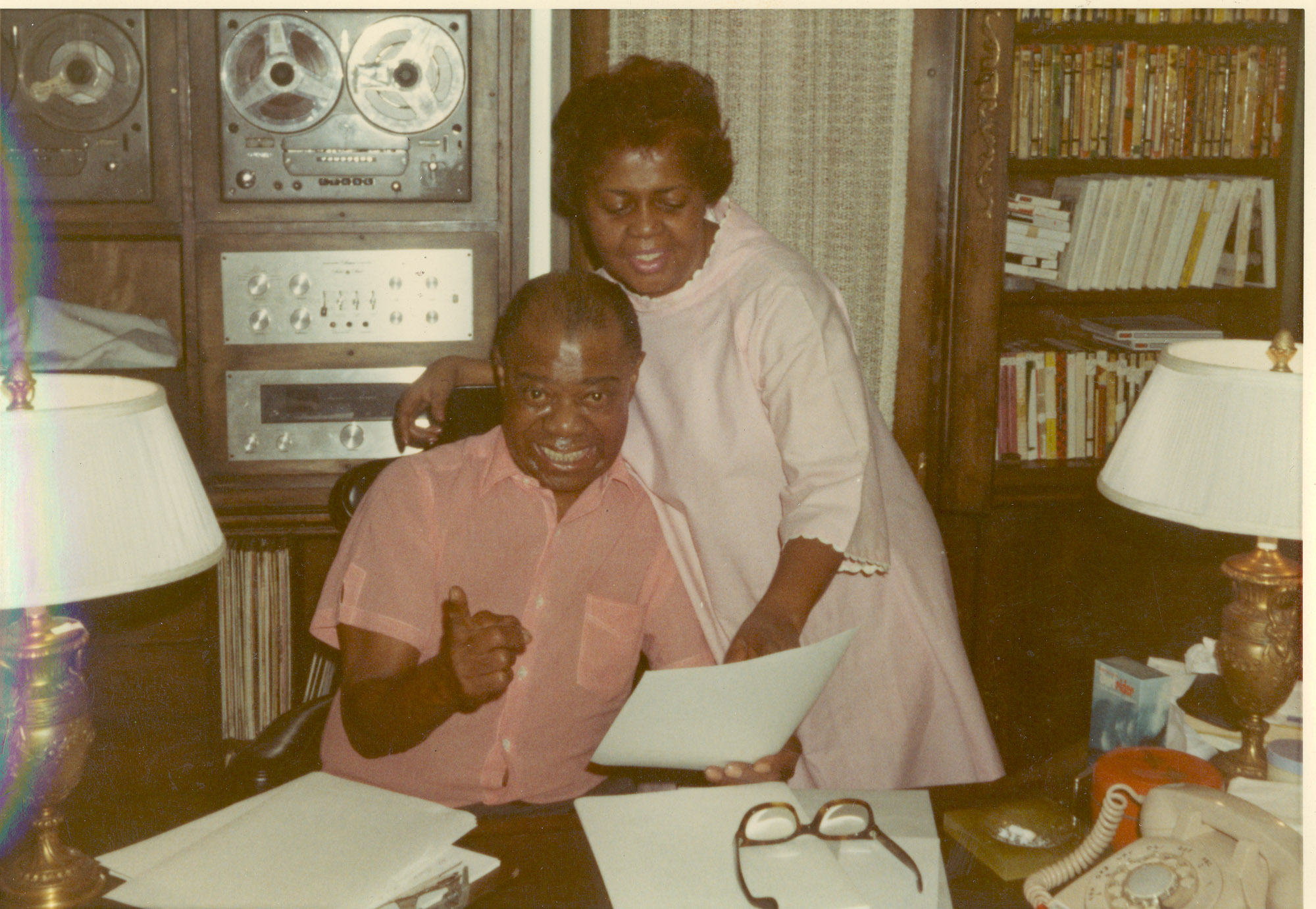 HAPPY DAYS…Armstrong and Lucille read through papers at home

“When we reached police headquarters…they all recognized me right away. They too had been diggin’ my music nightly over the radio. Oh boy, were those guys glad to see me.

“They gave me one look with glee and said, ‘What the hell are you doing here this time of night away from the club?’ And we yakity yakity while I was being booked.”

On another occasion, Armstrong’s wife, Lucille, was arrested for possession of marijuana in Honolulu in 1954, escaping with a $100 fine.

Angered by this incident, Armstrong wrote a letter to his manager Joe Glaser – which he then dictated into his tape machine – with an ultimatum: either fix it so I’m never arrested for possession again, or I quit playing trumpet forever.

And Glaser, who was known for his mob connections, made sure that he never was busted again. 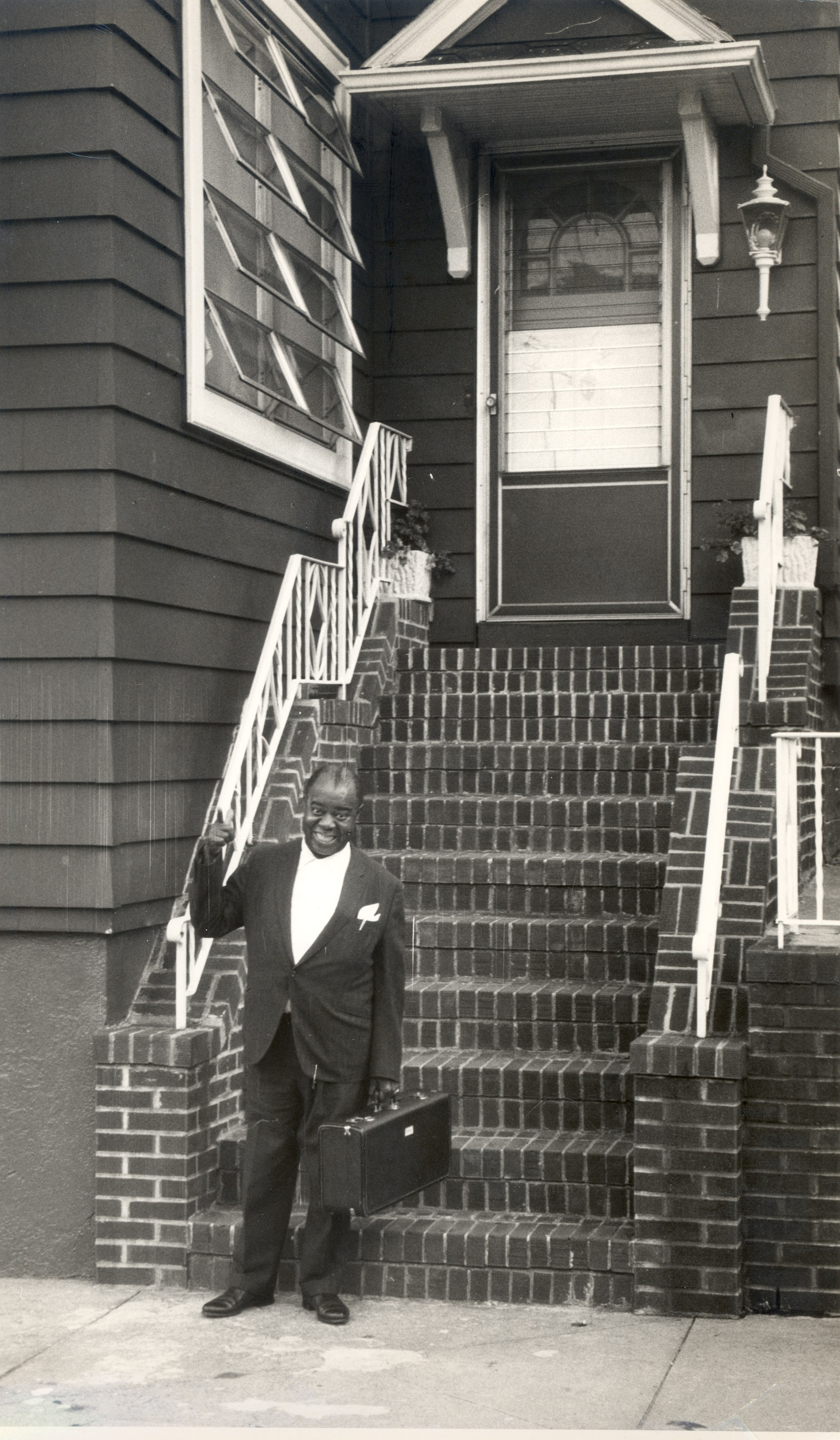 STAR…Armstrong outside his house in Corona, which is now the Louis Armstrong House Museum.     Photo: Jack Bradley

In the Glaser recording, Armstrong says: “You must see to it that I have special permission to smoke all the reefers that I want to, when I want, or I will just have to put this horn down, that’s all.  It can be done.  Nothing impossible, man.

“Do you ever stop to think what I have to go through to keep that note, which thrills millions all over the world, right up there where it belongs?  Do you ever stop to realize that?  No one else boasts it.  No one in the universe.”

Armstrong makes it clear that marijuana was his only drug of choice. Unlike many jazz musicians of that period – including legends like Charlie Parker and Billie Holiday – Armstrong had no interest in heroin, cocaine, or even alcohol.

He explains: “Of course, it’s not the reefers in the manner, but since I do like to have a little drag or so – I don’t drink and have never once thought of using a needle – but I can gladly vouch for a nice, fat stick of gage which relaxes my nerves, if I have any.

“A hard-working salary man such as myself, I have to go through the whole world with this horn, making millions happy and at the same time, ducking and dodging cops, dicks, immigration, stool-pigeons, so forth – why?  Cause they say it’s against the law?

“Why shouldn’t I have something with me that relaxes my nerves, concentrate on ideas of importance for my horn, my happiness? 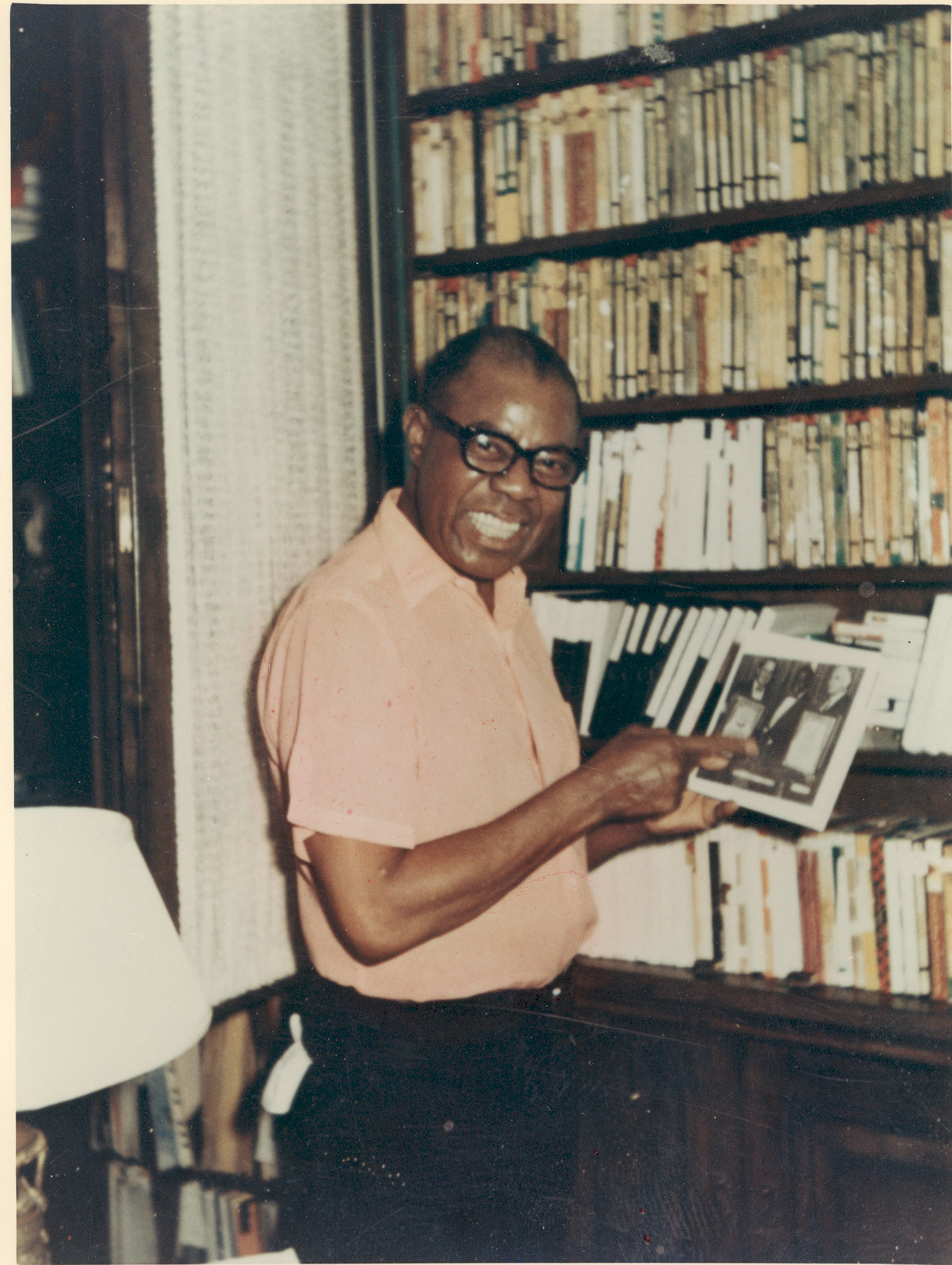 LIBRARY…Armstrong with his tape collection, which runs to thousands of hours of recordings

“Compare the pistol and the pistol will kill someone before marijuana.  Yeah. I can’t afford to be ducking and a-dodging and being tense, fearing that any minute I’m going to be arrested, brought to jail for a silly, little minor thing like marijuana.

“Can you imagine anyone giving Lucille all of those headaches and grief over a mere small pittance such as gage, something that grows out in the backyard among the chickens and so forth?

“I just won’t carry on with such fear over nothing and I don’t intend to ever stop smoking it, not as long as it grows. And there is no one on this earth that can ever stop it all from growing.  No one but Jesus, and he wouldn’t dare because he feels the same way that I do about it. It’s prettier for medical purpose.”

The seemingly gentle Armstrong – who was nearly always seen publicly with a huge smile on his face – also possessed a healthy ego and was not afraid to remind Glaser just what he accomplished night after night.

He says: “Just a little freshen up in your memory: you have within Louis Armstrong a million-dollar attraction…you must get me that permit. It just isn’t worth being kicked in the ass by jerks, especially because we’re colored people.

“Where there’s a will there’s a way, and Daddy, let’s face it, you must find a way. Nothing impossible where you’re concerned, you know that.

“So get me that paper, man!  And stipulate all over the world, I must not be humiliated again, ever, as long as I’m blowing trumpet for you.

“I really don’t feel like I’m asking too much. I’m not asking y’all to buy marijuana for me. Just keep it straight so I can buy it. If I should feel that I’d like a few drags, it’s just gotta be all right, that’s all. Because gage ain’t nothing but medicine.”

*This article contains edited extracts from the tapes, which are owned by Louis Armstrong House Museum. To make an appointment to listen to them at Queens College, click here. You can also search the museum’s entire collection here.