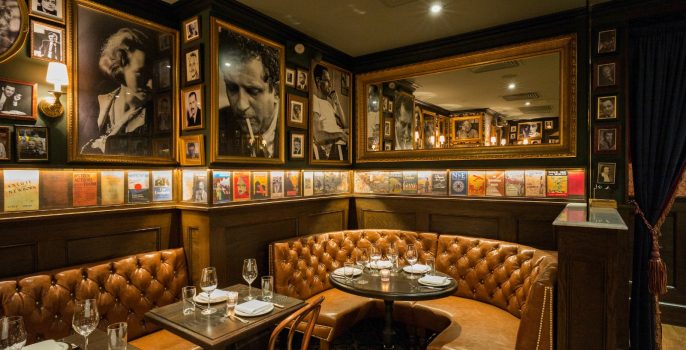 on January 12 | in Culture, Vintage | by Boo Paterson | with No Comments

Sometimes too much reality is a bad thing – the upcoming inauguration of President Trump is one of those times. So for those who want to stick their head in the sand during his appointment, we have found a few places you can go to pretend the whole sorry affair isn’t happening.

Chumley’s – 86 Bedford, between Barrow and Grove, West Village (pictured above)

Escape down an early 20th century rabbit hole of great authors and artists at this legendary speakeasy, and the inauguration will be nothing but a hazy memory.

Simone de Beauvoir wrote of Chumley’s, “the room…has something so rare in America — atmosphere”. It still oozes 1920s glamour and the friendly staff make you feel you’re a regular the minute you step inside.

F Scott and Zelda Fitzgerald drank here, as did Faulkner, Salinger, Ginsberg Hemingway and Kerouac. Their vintage book covers line the walls, so you might ponder on great minds, not tiny minds.

Forget your worries, feast on oysters and steak, and party like it’s 1929 with a gin cocktail that seems to snub its nose at the incoming president – a Smart Little Feller.

Hide in a luxury hotel

You can always throw money at the problem and spend a blissful 24 hours cocooned in opulence.

For a mere $1,125, Crosby St Hotel staff will greet you with a bottle of Krug champagne and canapés in the Drawing Room, where you can relax by the roaring fire with a good book.

Then you can retire to the privacy of your Luxury Junior Suite and enjoy a long bath with a movie after the candle-lit turn-down. Don’t forget to cancel the next day’s newspapers – you don’t want reality spoiling the ambience.

In the morning, have a long lie and a champagne breakfast in bed to steady your nerves before your late check-out at 2pm.

It’s always the 1950s at Trailer Park Lounge. Festooned with kitsch, fairy lights, and photos of Elvis Presley impersonators, why not run away to a simpler time of post-war optimism and Bobby-soxers?

Chow down big plates of backyard home cooking, like beef burgers, mac and cheese, and nachos, and wash them down with a pitcher of margarita or memory-obscuring cocktails, such as Jim Bob’s IQ.

It will feel like you’re in Happy Days, at least until tomorrow, when you will realise it’s the end of days.

A Chevrolet Bel Air is one of the centrepieces of the museum’s excellent Cuba! exhibition.

Walk along a Cuban street, gawp at a boa constrictor, and admire a 1955 Chevrolet Bel Air – these are all things you can do in Cuba, and at the ground-breaking exhibition ¡Cuba!

If you don’t have a visa to get you to Havana on Jan 20, then just take the 1 train to 79th Street and immerse yourself in the nature and culture of the Caribbean archipelago.

As well as the live animals, the curators have also reconstructed a whole cave, where you can examine fossil remains. You might also want to hide in there until 2021.

A still from Tony Palmer’s acclaimed Leonard Cohen: Bird On A Wire, which is playing at Film Forum. Pic Isolde Films.

At trying times like these, Cohen often had the answer.

Sink into Leonard Cohen: Bird on a Wire and follow him during his 1972 European concert tour, on stage, singing backstage with his band and gamely enduring press interviews.

He performs many of his classic songs – Suzanne, Sisters of Mercy, Chelsea Hotel, Famous Blue Raincoat, and So Long, Marianne – and is self-deprecatingly funny and humble.

It’s the perfect antidote to the arrogance and stupidity to come in 2017.

*Until Jan 31. All tickets available at the box office on day of show beginning at noon daily. Showtimes vary.

Warm up in the cosy, vintage, candle-lit interior and enjoy chef Ivan Garcia’s culinary tributes to Mexico City. A Sopa Azteca followed by a quesadilla will strip the cold from your bones and the sadness from your heart.

Finish up with crisp churros with chocolate and salted-caramel, then stand alongside our South American brothers and sisters, and proclaim: “Viva Mexico!”

Go to a love-in

We all know that what the world needs now is love – not a billionaire demagogue. With that in mind, arts collective Last Frontier is hosting We Shall Overcome: An Inauguration of Love on January 20.

They want to “be the beauty we wish to see in the world” and invite you to join them for an evening of sound healing, live music, and the joy of creative community.

The event starts at 8pm with sonic-guided meditation, relaxing sound journeys, and an acoustic set by singer-songwriter Katy Gunn, before ending with a country-infused gig from Lesley Kernochan & band.