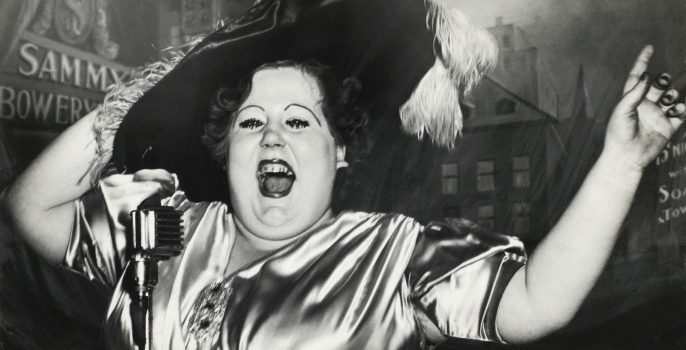 Press photographer Weegee’s Bowery was a Skid Row of derelicts and drunks – a world away from the boutique hotels and hipster joints that line the street today.

In the 40s and 50s, it was notorious for fleabag hotels, flop houses that offered 25-cent-per-night beds, and crowded all-night missions that provided food and shelter to those who could afford neither. 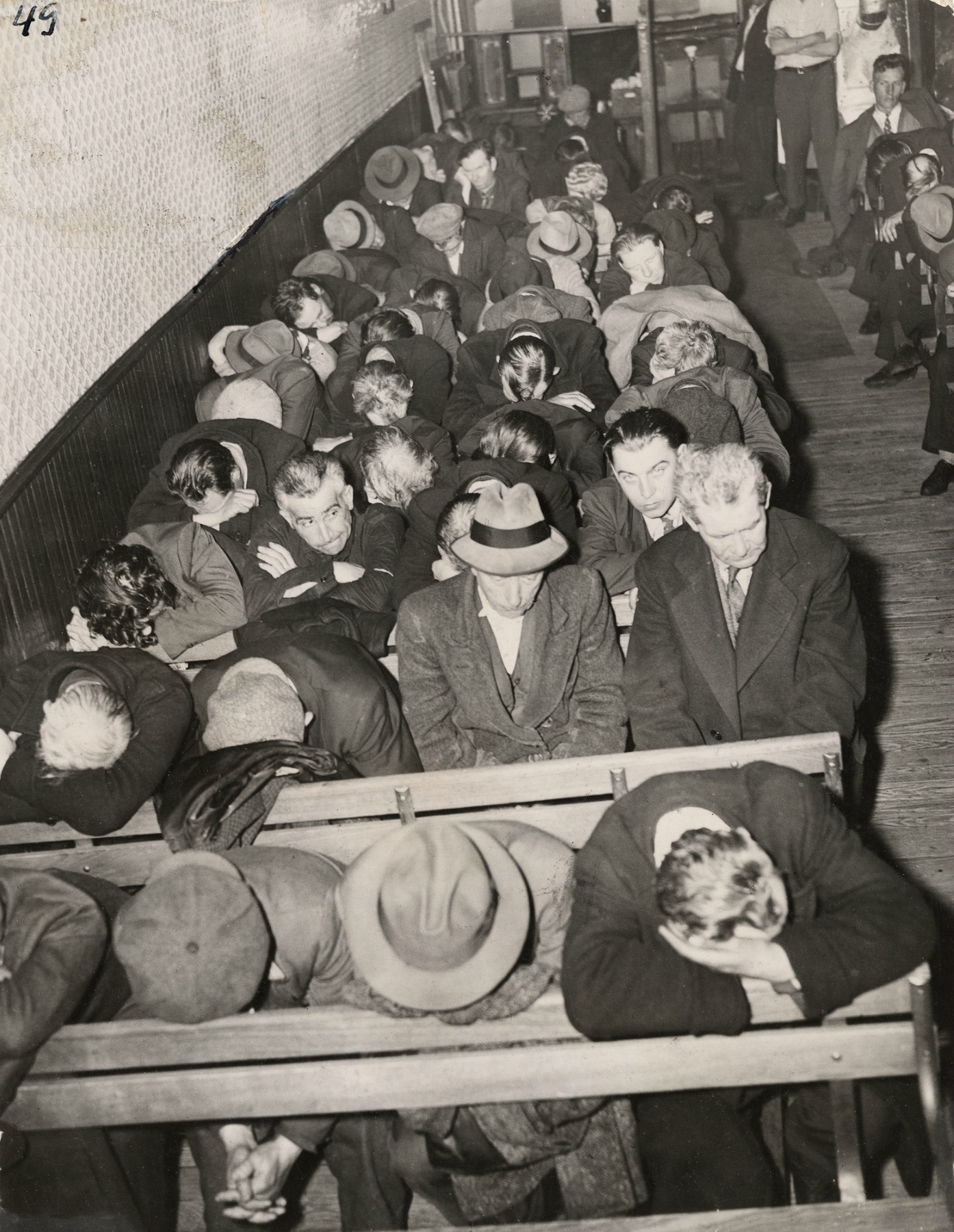 Now a new exhibition by the International Center of Photography, Weegee’s Bowery, is shedding light on this underclass of transients, who huddled in the shadow of the Third Avenue elevated railway, and were caught by Weegee’s lens.

Weegee even lived amongst his subjects in the early 1930s. ICP Weegee specialist Christopher George said: “In his autobiography Weegee by Weegee, he writes for a time he lived in a ‘Bowery flea bag. Beds in the dormitory were only fifteen cents, but I liked the privacy. The coughing of the drunks went on all night long, but I didn’t care. I liked the Bowery. It was colorful. At night I would go to the missions… There was no crime on the Bowery’.” 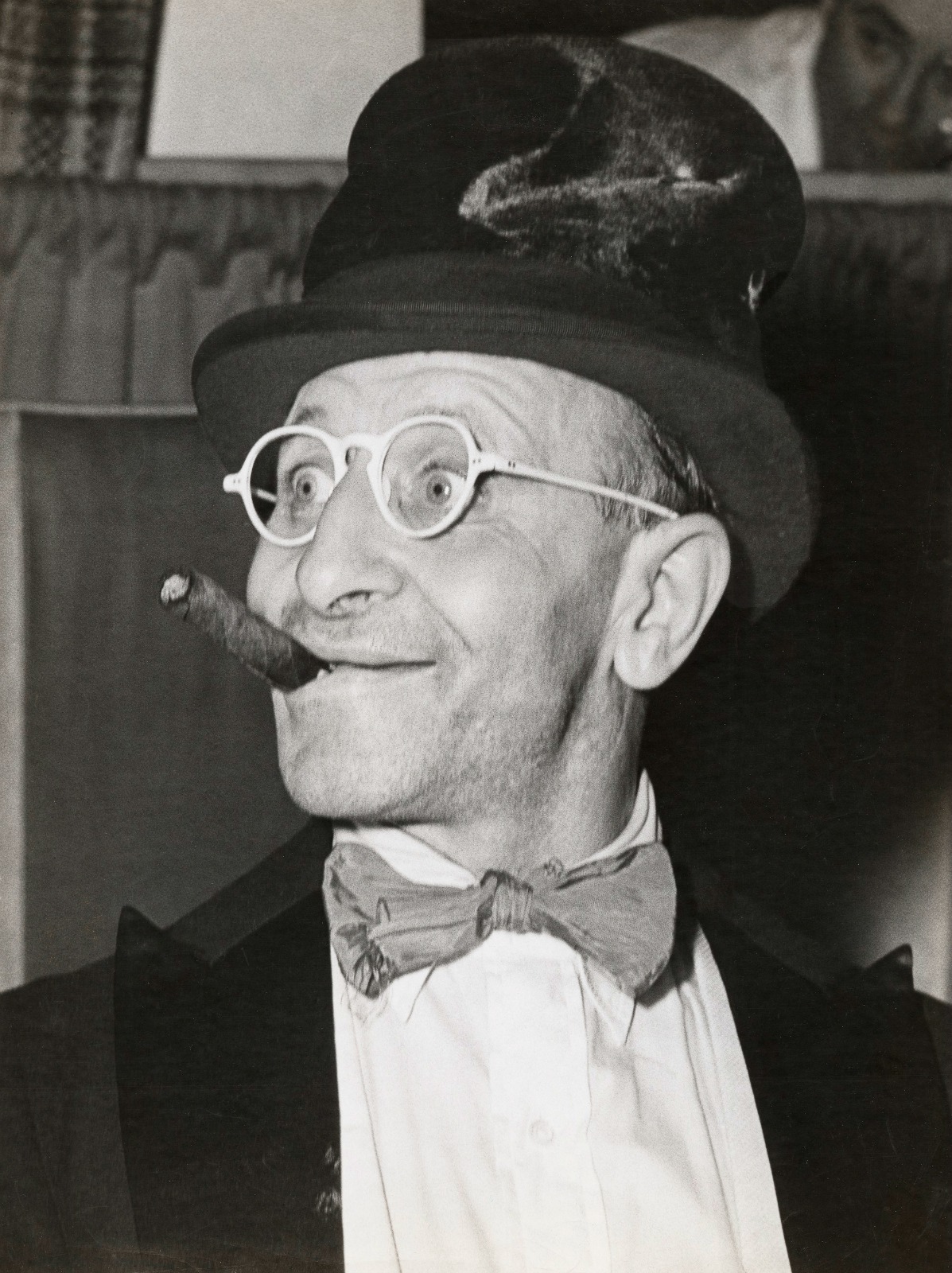 Weegee’s Bowery includes an extensive selection of his photographs of a raucous nightclub and cabaret called Sammy’s, located at 267 Bowery.

From its opening in 1934, until its doors closed in 1970, Sammy’s provided a setting where adventurous uptown sophisticates could mingle with the bar’s flamboyant entertainers and hard-drinking regulars.

The New York Times described Sammy’s clientele as a mix of ‘drunks and swells, drifters and celebrities, the rich and the forgotten’. 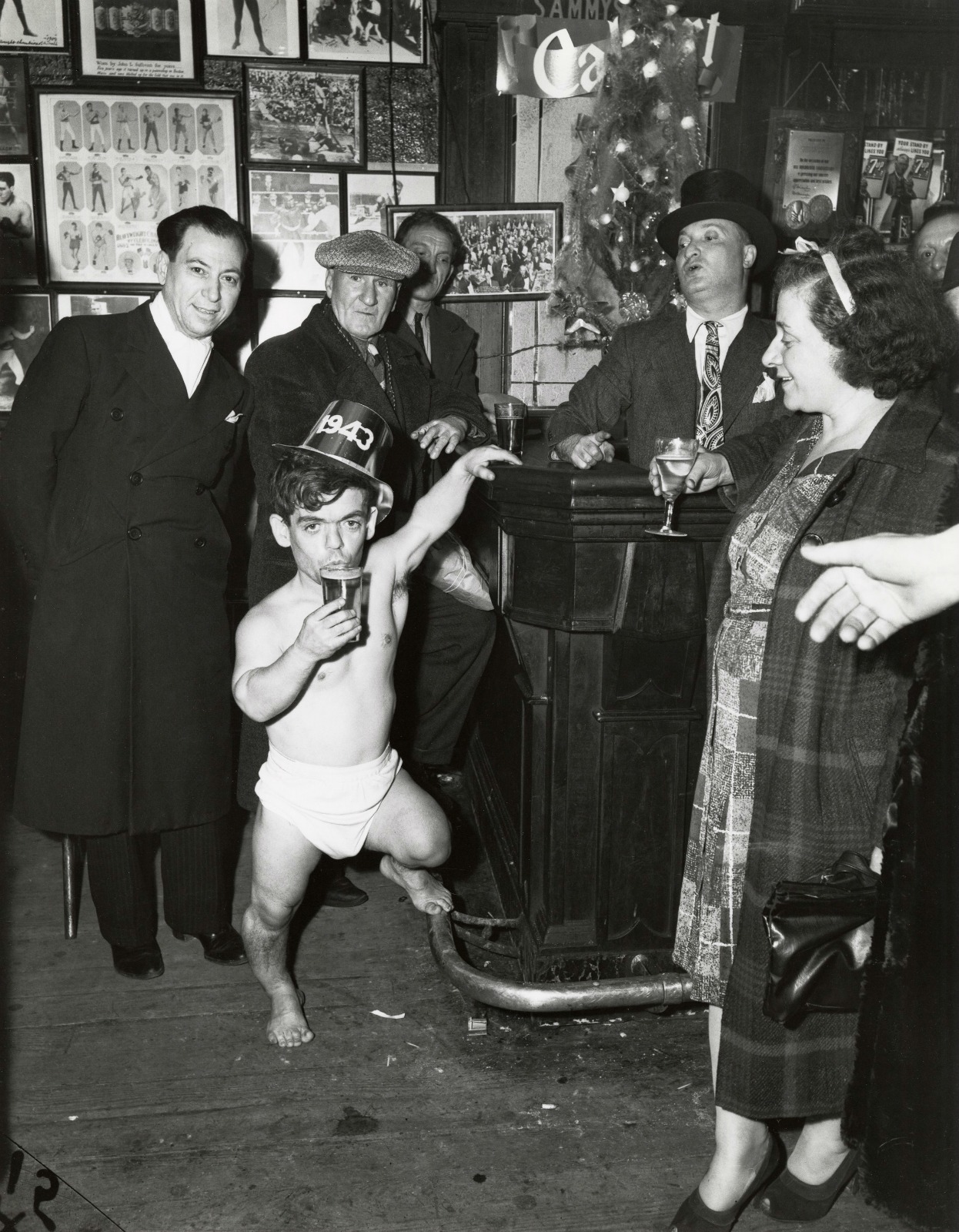 Weegee – whose real name was Arthur Fellig – also appears in a number of the 39 photographs on display, as the boisterous book-launch parties for his publications Naked City and Weegee’s People were held at Sammy’s.

But while Weegee photographed hard-living drinkers, he himself was known more for being extremely hard working.

George explains: “The photos of Weegee’s book publication celebrations, in 1945 and ’46, are fascinating. In July 1945, when World War II was winding down, a few weeks before atomic bombs were dropped on Japan, Weegee was at the acme of his career and was famous. 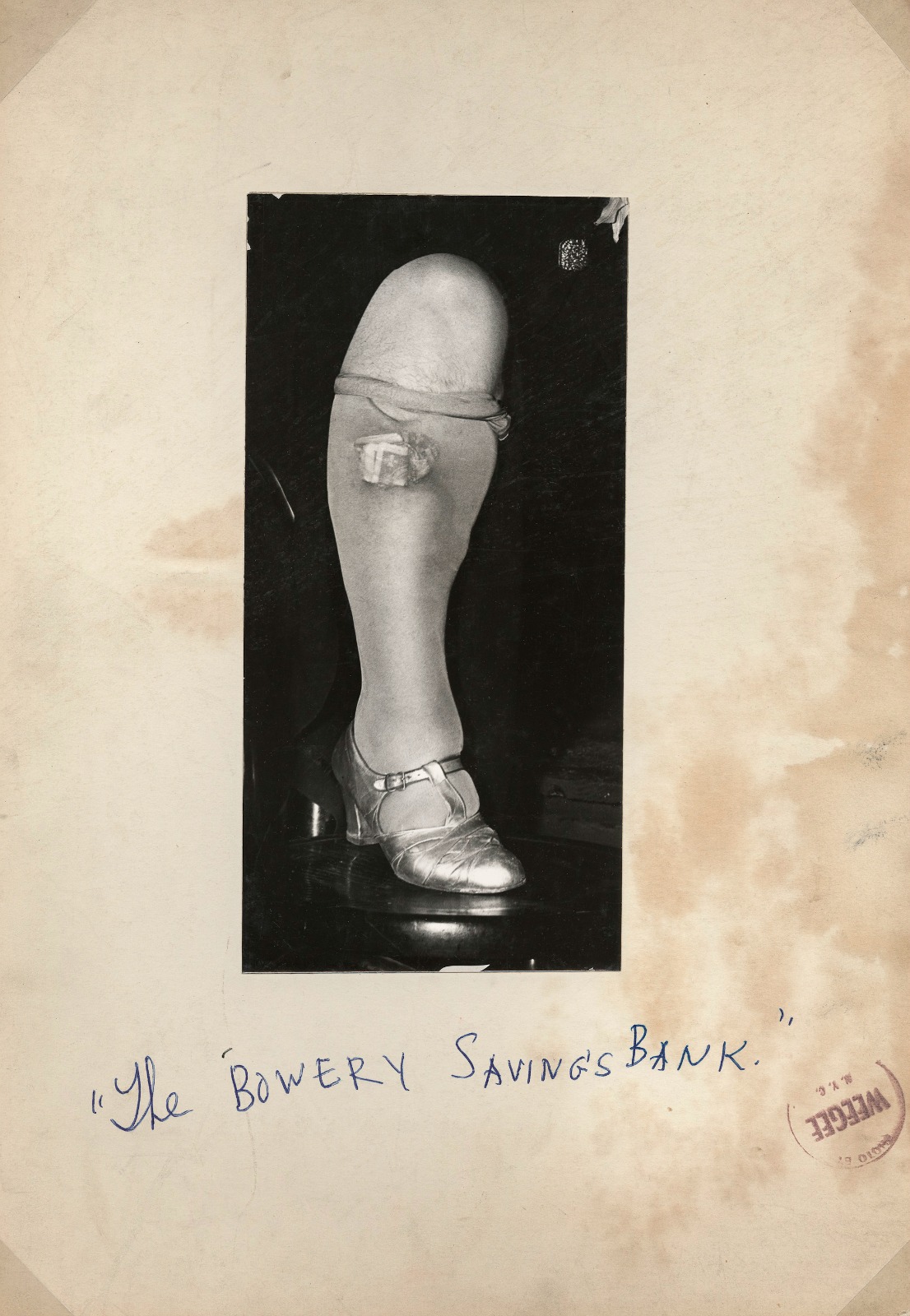 “The wildly exuberant publication parties were the culmination of 10 years of near-obsessive, around-the-clock work as a freelance photographer and photojournalist, often photographing difficult things; tragedies like crimes and fires.

“In the photos, Weegee is celebrating (dancing with and kissing many female guests) but he’s also working. During the 1946 Wegee’s People publication party, in photos made by the genius Simon Nathan and brilliant Lee Sievan, he’s seen wearing a tuxedo and holding a Bolex 16mm movie camera.

“Portions of what he filmed that night at Sammy’s are in his film Cocktail Party – which is included in Weegee’s Bowery. 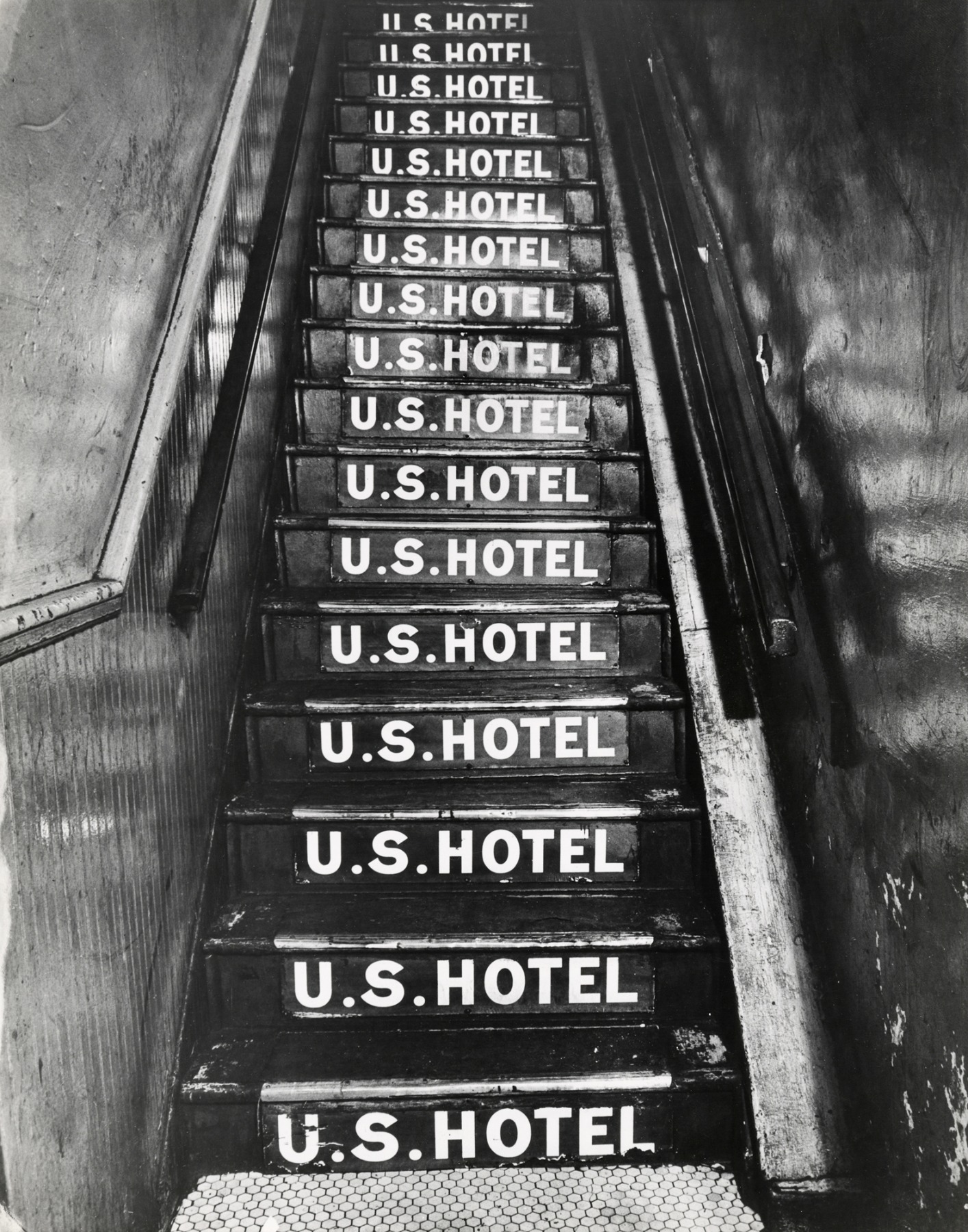 The 39 prints in the exhibition have been chosen by George from ICP’s holdings of more than 20,000 Weegee photographs. He said: “More than 300 of his photographs were made on the Bowery.

“The photos in the exhibition are a mixture of well-known and lesser-known pictures. Half of the photos were published in Weegee’s lifetime, and about a quarter have never been published. Almost all the photos were made between Houston and Canal streets, when Weegee lived four blocks west of the Bowery. 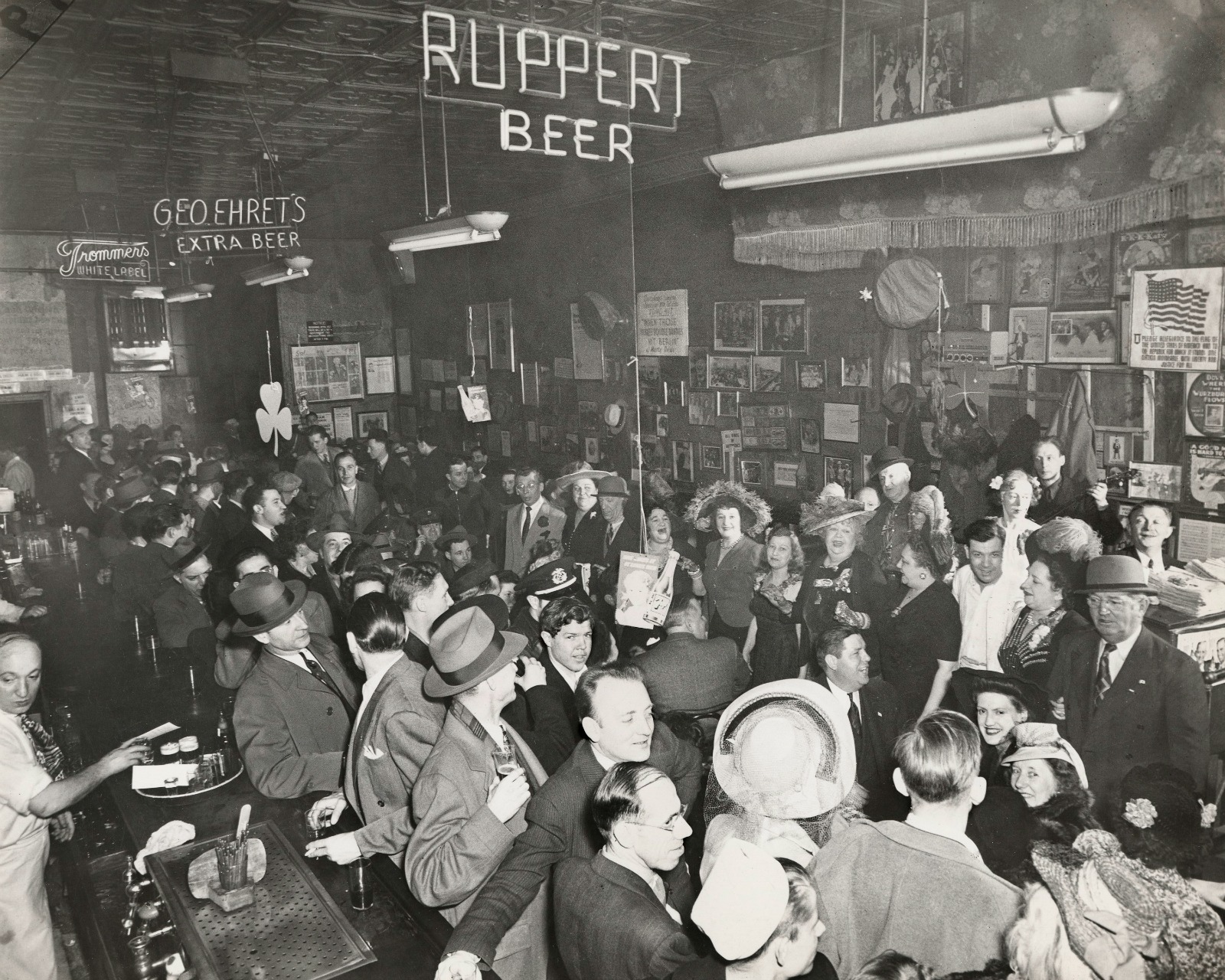 “I love all the photos, for different reasons, but at this moment a favourite is Under the Third Avenue El. First published in Naked City with the caption ‘But there is beauty along this street of forgotten men… it lies in the patterned black and gold along the trolley tracks where the morning sun breaks through’.
“The photo was made at the intersection of Bowery and Broome, looking downtown; the Bowery Savings Bank is barely visible on the right. It’s one of the few photos where the light and infrastructure of New York City are the main focus, not the people and not an event. 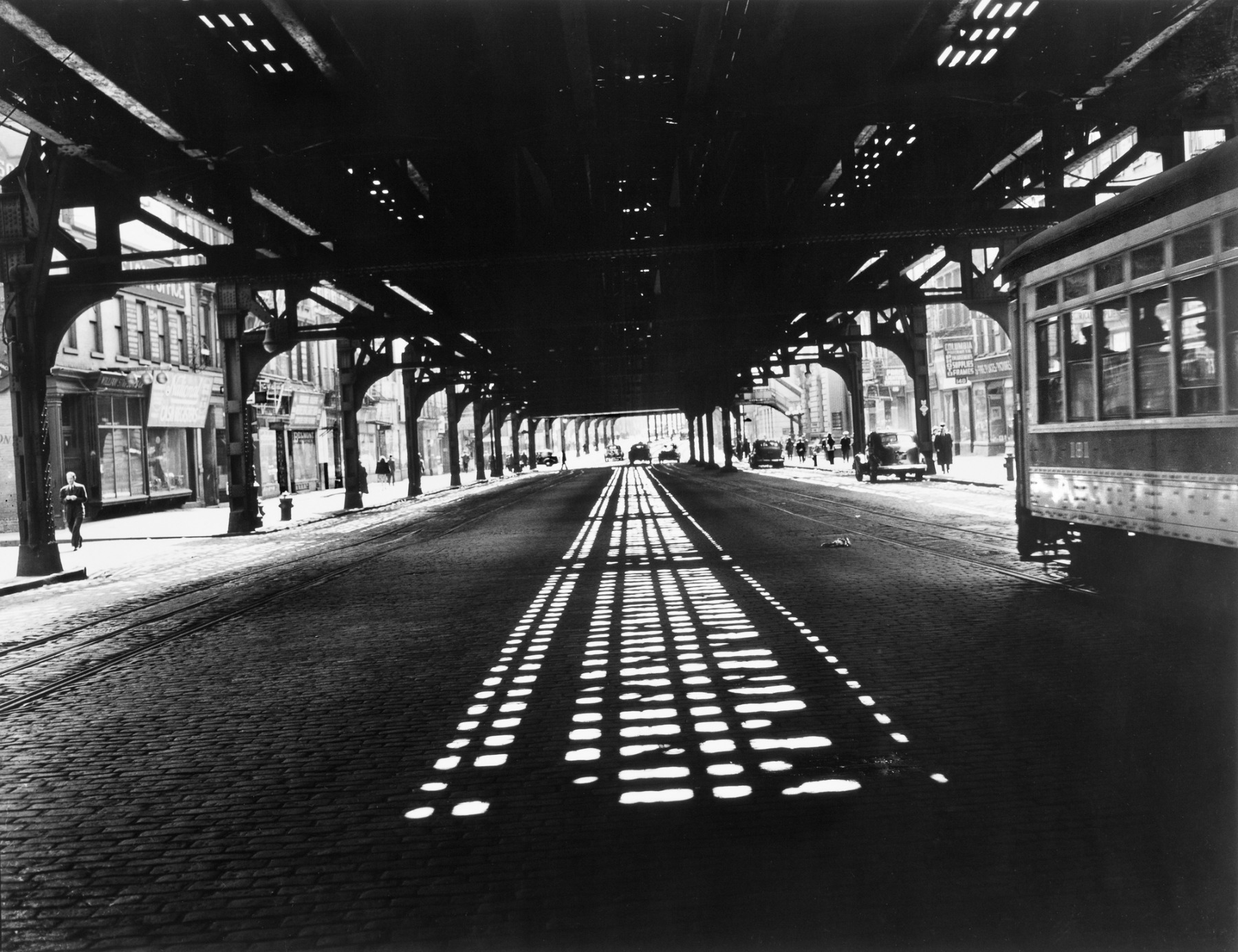 “It was made in the first flush of morning without a flash, captures the glittering cobblestones and reflects the patterned radiance and brilliance of the Bowery. It’s a beautiful landscape of a surprisingly still and changing New York; and still changing Bowery.”

*Weegee’s Bowery, which is organized in conjunction with the June opening of the new ICP museum at 250 Bowery, runs until Aug 5, at Mana Contemporary in Jersey City.