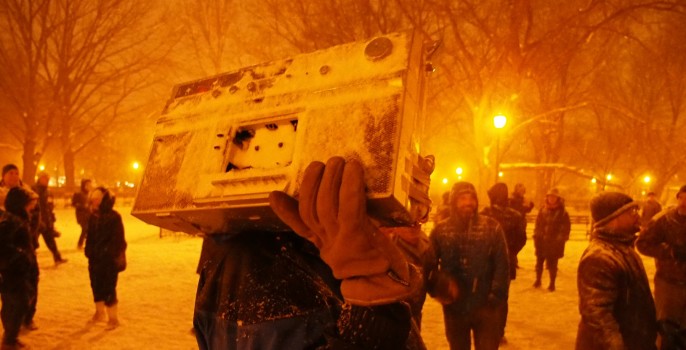 on November 24 | in Culture | by Boo Paterson | with No Comments

Hundreds of New Yorkers are set to take part in a unique Christmas carolling party – with blaring boomboxes.

Unsilent Night is a street promenade where the audience becomes the show, playing specially composed tunes from ghetto blasters.

The music’s composer, Phil Kline, will lead the massive chorus from Washington Square Park to Tompkins Square Park at 7pm on December 12, 2015.

Kline – who also writes orchestra and theater music – said: “We’re each playing a separate audio track which is part of the piece. In effect, we become a city-block-long stereo system.

“You’ve never heard anything like it. Someone said it sounds like ‘sheer sonic tinsel’. And you are part of the orchestra – all you have to do is carry a boombox, or a smart phone with a speaker.”

Participants start playing their devices simultaneously, then walk the carefully chosen route through the city’s streets, creating a unique mobile sound sculpture, which is different from every listener’s perspective.

Kline will hand out a limited number of vintage boomboxes from his collection, and cassettes and CDs for those who bring their own players, though many people now use smartphones with portable speakers at the annual event.

Each participant gets one of four tracks of music and, together, these comprise Unsilent Night.

LOAN…boomboxes that participants can borrow from Kline. Pic by Taylor Davidson

The event began on a much smaller scale in 1992, when Kline invited a few dozen friends to Greenwich Village, gave them boomboxes with one of four different tapes inside, and asked them to press ‘play’ at the same time.

What followed was a magical sound unlike anything they had ever heard before, reverberating off buildings and streets as the friends walked a pre-determined route.

Kline kept developing the composition until 1998, when it became the work that is still played today in over 100 cities around the world.

Although the piece can be played through a multitude of devices, Kline originally designed the piece to incorporate the unreliability, playback delay, and quavering tones of cassette tapes.

He said: “Today most people have digital players, so I make the audio available in that format as well—but there’s something about the twinkling, hallucinatory effect of a warbling cassette tape that I enjoy.”

To participate, click here. Participants to meet at 6.45pm at the arch in Washington Square Park. The event ends at Tompkins Square Park around 7.45pm.