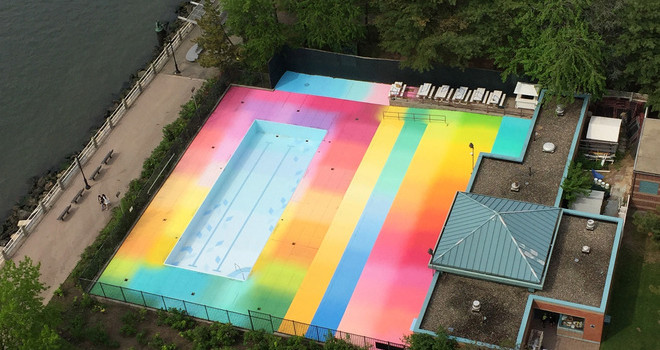 on June 9 | in Culture | by Boo Paterson | with No Comments

Take a dip in the coolest New York pool of the summer, which has been transformed into a vast artwork.

Street artist Eric Rieger – also known as HOT TEA – painted the candy-toned rainbows on the deck of Manhattan Park apartment complex on Roosevelt Island, and you can hang there all day for just $25.

IN THE SWIM…the pink poolside at Manhattan Park. Pic: K&Co and Pliskin Architecture

This pop-up pool club – which was designed by K&Co and Pliskin Architecture – is open to non-residents and boasts brand new sun loungers, hammocks and umbrellas for maximum ray-catching comfort.

It took 120 gallons of paint to complete the artwork, and Rieger said he called it Asylum – not because Roosevelt Island used to house the New York City Lunatic Asylum – but “because the act of creating it pushed my mental and physical endurance so far that I wasn’t sure I could complete the task”. 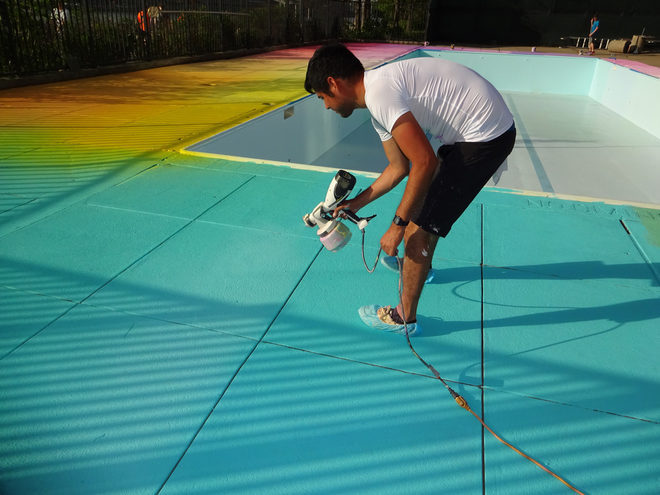 Rieger was initially a graffiti artist, but after he spent time in prison for tagging, he went to art college to get a degree in graphic design, and this influence can clearly be seen in his brightly colored large installations, which include yarn-bombing a tennis court.

His grandmother initially taught him to knit, but when she died in 2007, he began to use those skills to create works of art throughout his home town of Minneapolis, including one at the MIA using 84 miles of string to represent the sun. 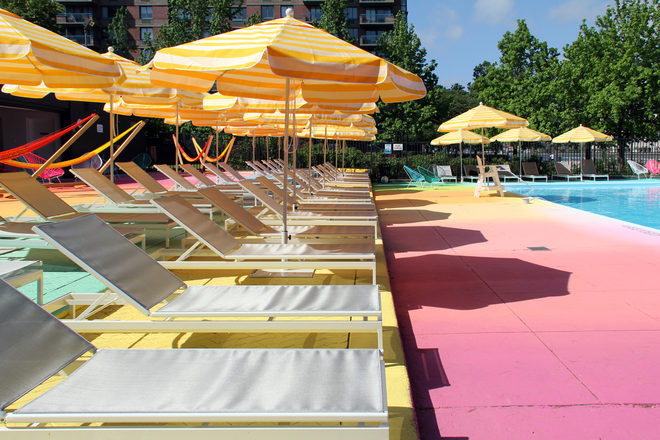 MELLOW YELLOW…non-residents can hang at the pool for $25 a day. Pic: K&Co and Pliskin Architecture

Regarding the sites he chooses for yarn-bombing, he said: “I gravitate towards old things…vacant spaces, spaces that aren’t being used any more, to sort of give them new life, so to speak.

“The medium itself, yarn, is pretty non-confrontational. When you add it to this [abandoned] environment that contrasts between the material and the colors. It really speaks to a lot of people. It speaks to me, that’s why I’m so passionate about it.”

*Manhattan Park pool passes cost $25 on weekdays and $35 at weekends. Season memberships cost $450 per person, or $650 per couple. 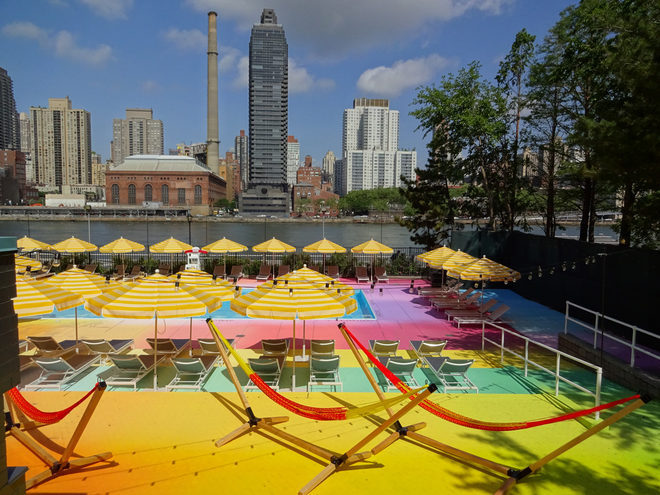 CITY BRIGHTS…the view from the pool to the city. Pic: K&Co and Pliskin Architecture