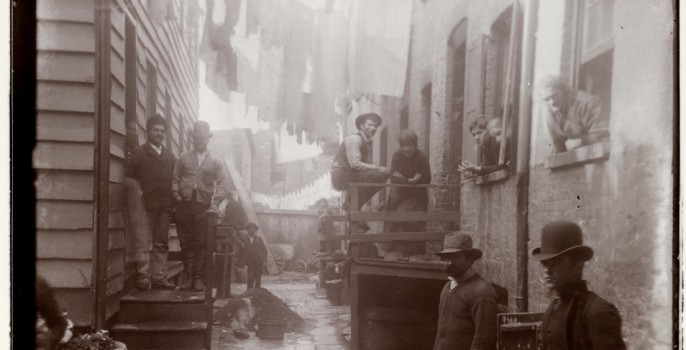 The other half of Jacob Riis

on October 27 | in Culture, Vintage | by Boo Paterson | with No Comments

Pioneering photojournalist Jacob Riis shocked New York society by shooting the squalid lives of the poor – and a new exhibition shows that his work is still highly relevant.

In 1890, Riis wrote the best-selling book, How the Other Half Lives, illustrated with upsetting photos showing orphans sleeping on the street, opium dens, and wretched tenement slums in the Lower East Side.

Now The Museum of the City of New York is showing 50 of Riis’ works, along with over 125 personal objects which give a more rounded evaluation of his life, including correspondence with President Roosevelt, handwritten manuscripts, and photography equipment.

Bonnie Yochelson, curator of  Jacob A Riis: Revealing New York’s Other Half, said: “Jacob Riis had a tremendous impact on society, photography and the history of New York City.

“As our city and our nation continue to struggle with inequality and its effects, this exhibition enables visitors to understand the story of the man who first illustrated life in New York City slums in the 19th century, providing a unique lens for viewing a present day issue.

“His work deserves to be revisited for its combination of historical importance and ongoing relevance today.”

CRAMMED…Five Cents a Spot, 1888-89. Lodgers were charged 5c to sleep on the floor ©MCNY

Born in Denmark in 1849, Riis came to New York City in 1870 and for several years experienced poverty first-hand.

Hired as a police reporter in 1877 for the New York Tribune, he wrote about crime, disaster, and misfortune in the tenements until 1884, when he turned his attention to housing reform.

He was the first to use the newly invented flash photography for a social purpose, exposing the dark alleys and unlit sleeping quarters of those at the bottom of the pile.

In this way, he galvanized action which led to the worst tenements being torn down, the reformation of the city’s schools and the installation of sewers and plumbing in the Lower East Side. Theodore Roosevelt went on to call him “New York’s most useful citizen”.

The exhibition recreates Riis’ famous and innovative lantern slide lecture How the Other Half Lives, allowing  the visitors experience the photographs as contemporary audiences once did.

Susan Henshaw Jones, spokeswoman for MCNY said: “We seek to define Jacob Riis and illustrate why his life and work resonated so deeply across the five boroughs and the entire country.

“One hundred years after his death, inequality remains an essential aspect of American life, and the story of Jacob Riis needs to be remembered.”

*The exhibition runs until March 20, 2016. For visiting hours and tickets, visit MCNY.

Pin It
» Culture, Vintage » The other half of Jacob Riis Jacob Riis, Lower East Side, Museum of the City of New York, vintage photography