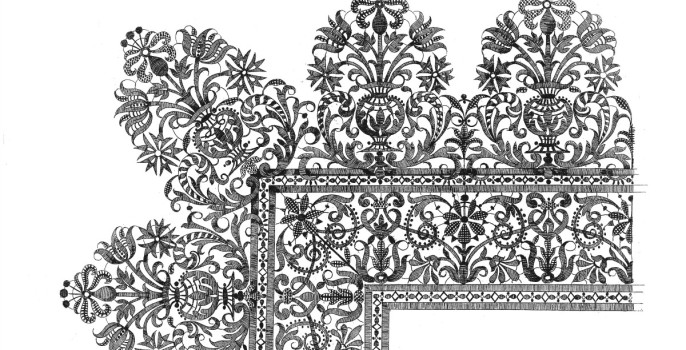 on November 4 | in Culture, Vintage | by Boo Paterson | with No Comments

Coloring books for adults are enjoying a boom-time, but a similar pattern book craze took off as far back as the Renaissance.

But rather than just filling in the blanks, the pattern books’ intricate drawings inspired women to create exquisite needlework, weaving and lacemaking, at a time when books had mostly religious or academic subjects.

Now the Metropolitan Museum of Art has launched and exhibition of these historic books, and the vibrant clothing that was made using them.

And it shows how these long-forgotten books – which originated in Germany in the 1520s – are the predecessors of today’s magazines, blogs, and sites like Pinterest, where people derive inspiration for their creative endeavors.

Curator of the Fashion and Virtue show, Femke Speelberg, said: “The pattern books bring art-making during the Renaissance a little closer to home.

“The publications were largely image-based and not too expensive. They brought patterns from all over Europe and beyond into the Renaissance household. They came out regularly and really form the predecessors to periodicals and blogs.”

And just like coloring books, the pattern books encouraged creativity amongst those who bought them.

“The focus was on what women could do with patterns at home with their own textiles,” said Speelberg. “The books encourage them to try out a pattern in different types of stitches and/or techniques and to pick and choose those elements which are the most pleasing to adorn clothing and other textiles used in the household.”

Few examples of the books survive, and the Met’s collection is one of the most important in the world. They were clearly well used – many of them have pages torn out, notations written on them, or other patterns drawn in.

Some of these historic patterns are even used in textiles and clothing today, and the museum wants artists and craftspeople to continue using the designs, by making them available on its online database.

Speelberg added: “Choosing a favorite is almost impossible, but an object that definitely stands out is the woodblock by Albrecht Dürer, on loan from Museum Bautzen in Germany.

“It represents one of a set of six designs for interlaced roundels, originally designed by Leonardo da Vinci, but copied by Dürer because he wanted his colleagues in the North to be able to enjoy the designs as well.”

*Fashion and Virtue: Textile Patterns and the Print Revolution, 1520–1620 is at The Metropolitan Museum of Art until January 10, 2016.