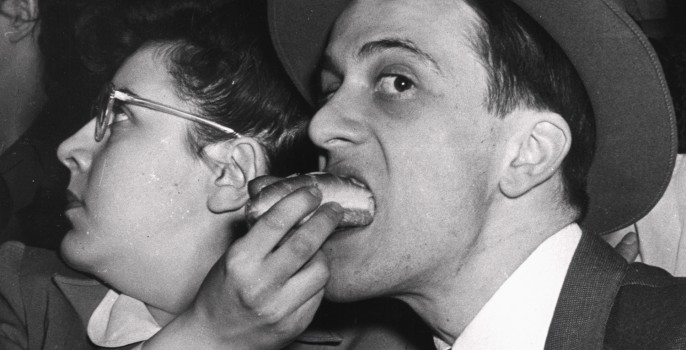 on May 20 | in Culture, Vintage | by Boo Paterson | with No Comments

Legendary photographer Weegee famously captured gritty scenes of broken bodies and bloodied gangsters, but his lifelong passion was actually the circus – and he even performed as a clown.

It was here that he photographed Hollywood stars, sad-faced dwarves, caged animals and audience members gawping at death-defying acts. 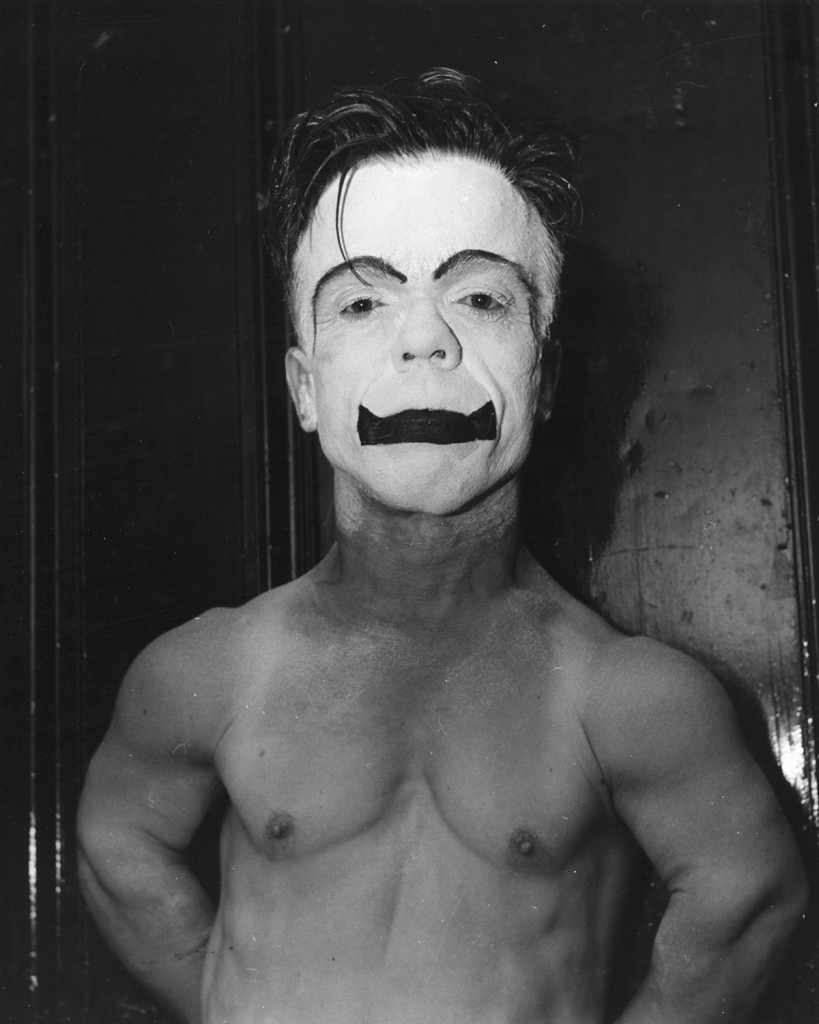 Brian Wallis, Chief Curator of the International Center of Photography – home to The Weegee Archive – said: “Weegee regularly attended the circus and photographed it from at least 1942-43 until the end of his life.

“With his own mixture of pathos and humorous schtick, Weegee was drawn to the clowns, and he made great portraits of Emmett Kelly and others, and even performed as a clown himself with the Ringling Bros. circus in 1943. 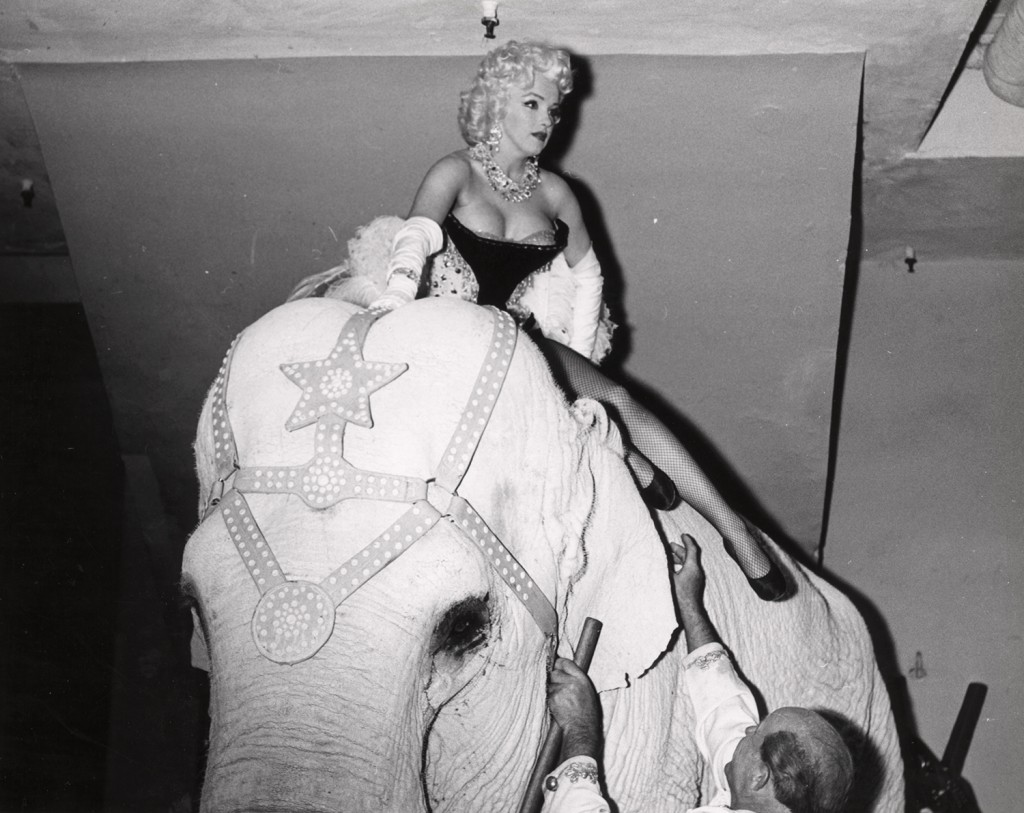 Marilyn Monroe on elephant, circa 1955. Pic by Weegee © International Center of Photography

“In his book, Naked City, Weegee wrote that the circus was a place where people of different races could enjoy themselves together: ‘All men are born free and equal… And it’s no crime to laugh… even if your skin is black’. He also said the circus is ‘where people can escape (and laugh) from the stresses and worries and rationing of WWII’.

The Weegee Archive has around 20,000 photographs and other ephemera, documenting the work of the man otherwise known as Arthur Fellig, who emigrated to New York from Austria when he was 10. 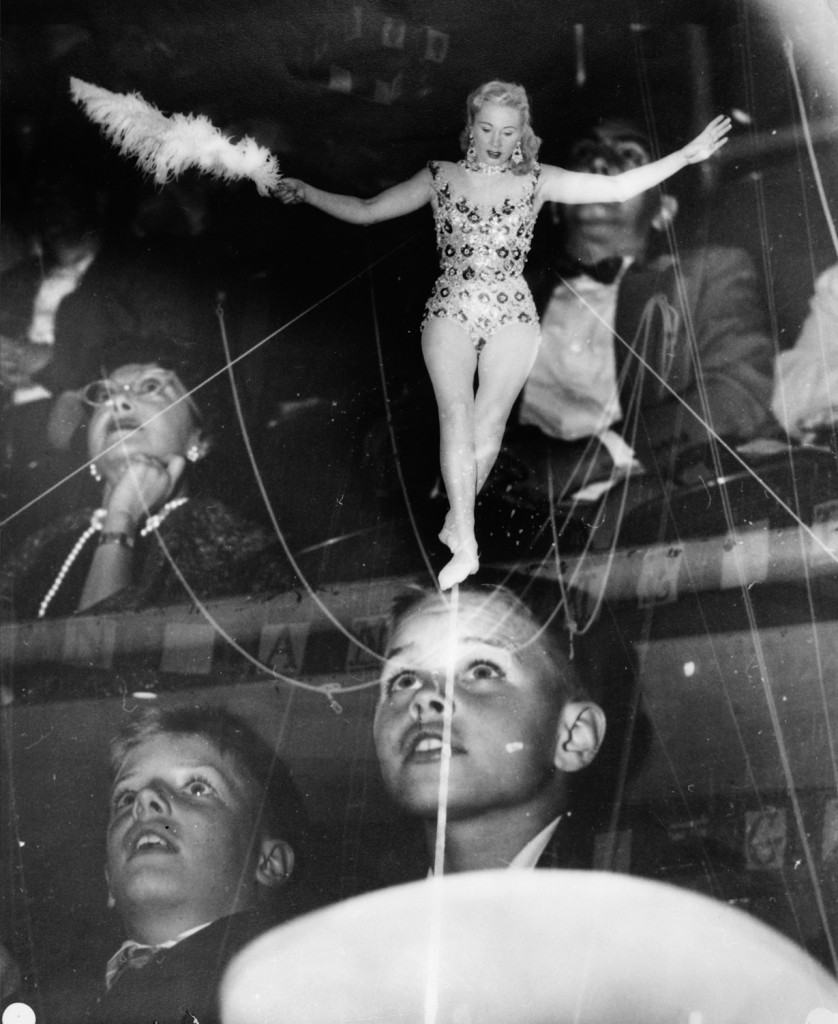 Circus performer and audience, circa 1955. Pic by Weegee © International Center of Photography.

He photographed celebrities, such as Marilyn Monroe and Marlene Dietrich, and recalls in Naked City the time when he captured the Duke and Dutchess of Windsor at the circus: “Who should walk into Madison Square Garden one night while the circus was playing there but the former King of England with Wally Simpson… the woman he gave up his throne for, because he loved her.

“Always on the alert… I quickly snapped their picture. Do you want to know why? Well, the Cigar Institute of America wants photos of celebrities smoking cigars, and they offer prizes to the photographers who get some pictures published in newspapers (they do this to counteract the movies, which show gangsters smoking cigars from the sides of their mouths). 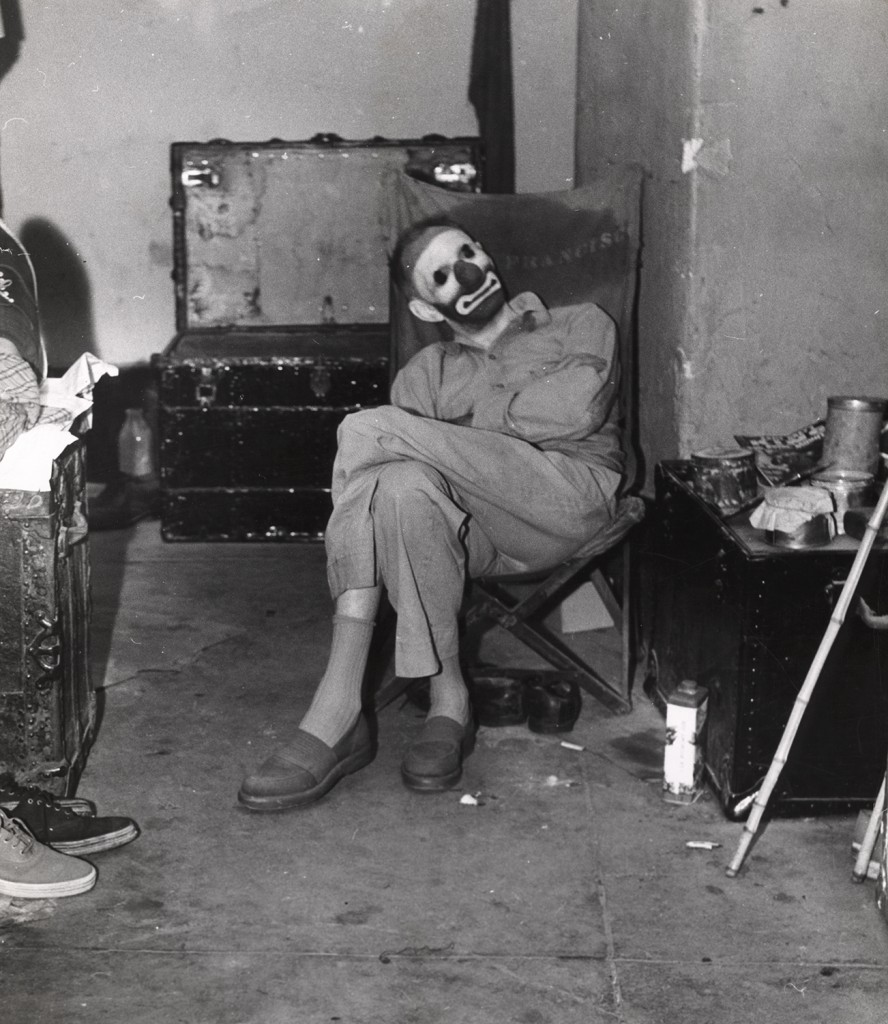 “Oh well, this shot got published. I won first prize – fifty dollars – a medal… and a pocketful of good cigars.”

His brushes with celebrity didn’t just extend to the circus. Weegee was also friends with film director Stanley Kubrick, when the latter was a New York-based photojournalist in the 40s, and even became the inspiration for Peter Sellers’ Dr Strangelove character in the Kubrick’s film of the same name. 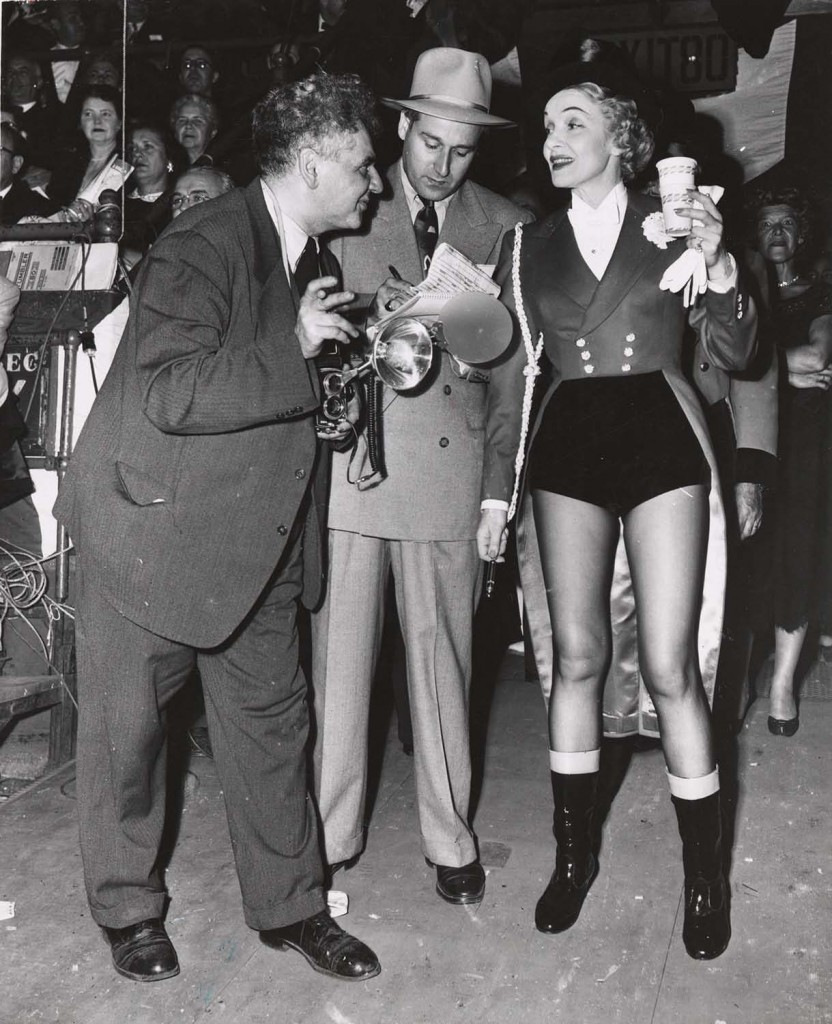 Wallis – who is author of Weegee: Murder Is My Business – explains: “Kubrick knew and admired Weegee and hired him to take stills for Dr Strangelove or: How I Learned to Stop Worrying and Love the Bomb. While Weegee was on the set, Sellars became fascinated by his strange Austrian accent and Yiddish-inflected speech patterns. “We have at ICP a recording that Sellars made of a brief interview with Weegee that Sellars supposedly used to formulate Dr Strangelove’s accent and manner of speaking.” 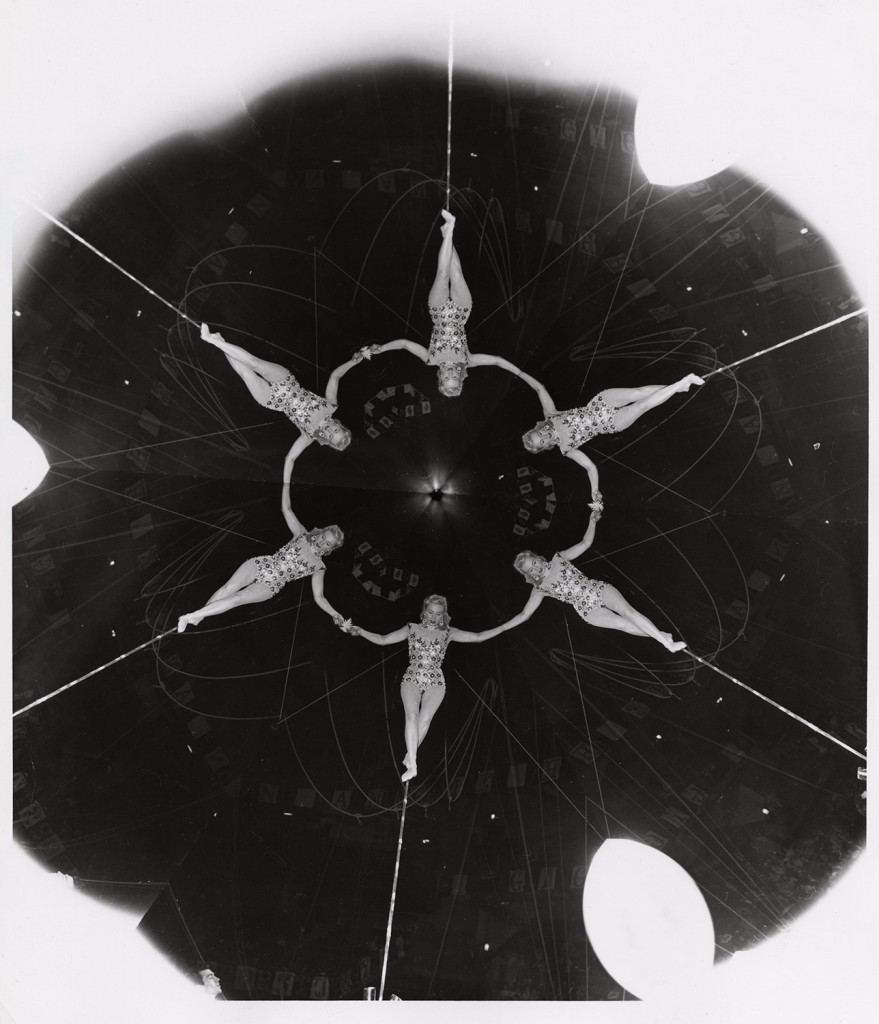 Weegee has influenced countless photographers since the 1940s, but among his principal influences during his lifetime were the socially engaged, New York-based photographers of the Photo League in the 1940s, and later, in the 1960s and 70s, the New York street photographers such as Diane Arbus, Garry Winogrand, and Jill Freedman.

Arbus and Andy Warhol were big fans and collected Weegee’s work in the 1960s; photographers Lou Stettner and John Coplans published the first monographs on Weegee in 1977.

Wallis says: “Weegee was not necessarily using the same techniques and equipment as other photographers. He was an extremely skilled photographic technician with a lifelong passion for new cameras and photographic innovations. 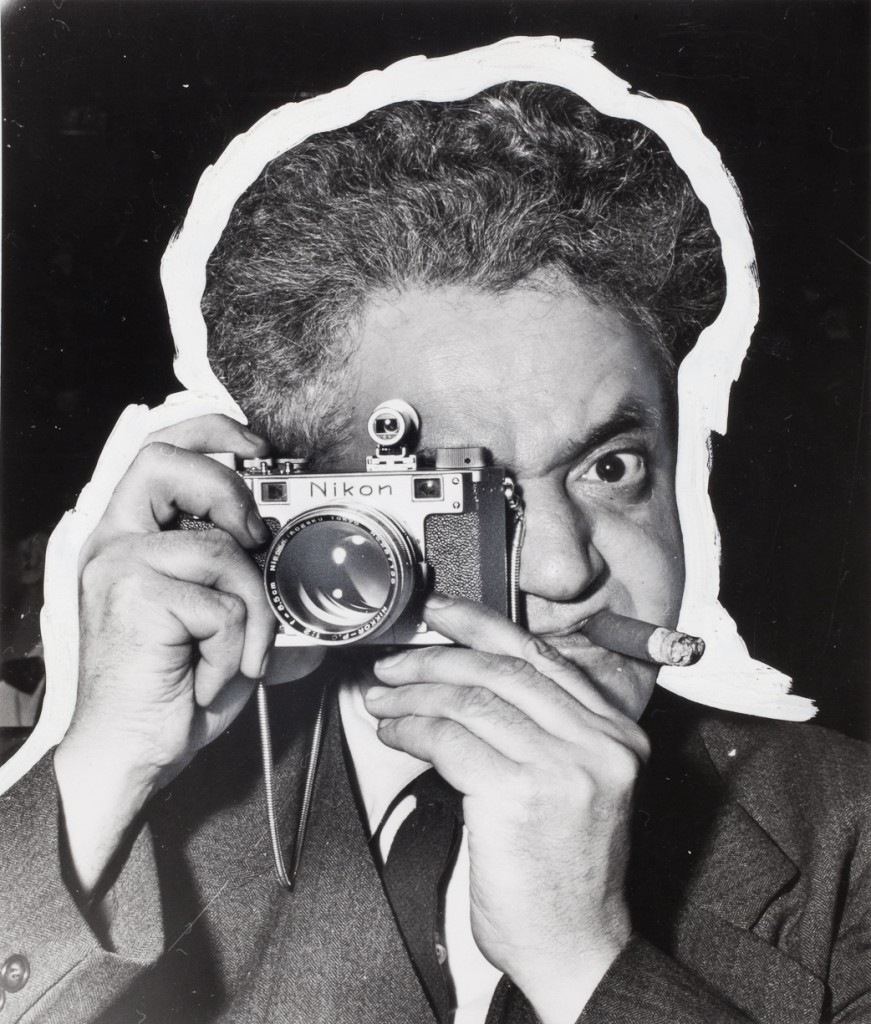 Self-portrait with distortion, circa 1955. Pic by Weegee ©International Center of Photography

“He was one of the first, for example, to exploit the photographic possibilities of the newly available flashbulb, using it to photograph night scenes and to create dramatically lit news images.

“But what really sets Weegee apart is his skill and insight as a storyteller, a humanistic man of the people, who understood the inherent drama in every picture.

“This skill also applied to his writing in captions and in stories that accompanied his news photos, as well as in his books, including Naked City and Weegee by Weegee. And where other narrators might turn sentimental or merely factual, Weegee had a keen sense of irony and vaudevillean humor.”

While Weegee was a fastidious photojournalist – meticulously recording the details of every crime and event he covered – he did stage some photographs in order to get the shot he wanted.

Wallis says: “He had a showman’s knack for finding the best angle for a shot – often sidewalk-level vantage points – the most dramatic context for a picture, or the best set-up for a gagline caption; as in his picture of a drunk lying in front of a funeral home, titled Dead Drunk.

“At the same time, he was not averse to adjusting elements in a picture, like moving the hat of a dead gangster or photographically removing a gruesome body from a crime-scene trunk. And he staged over 1,000 portraits of himself throughout his life.” 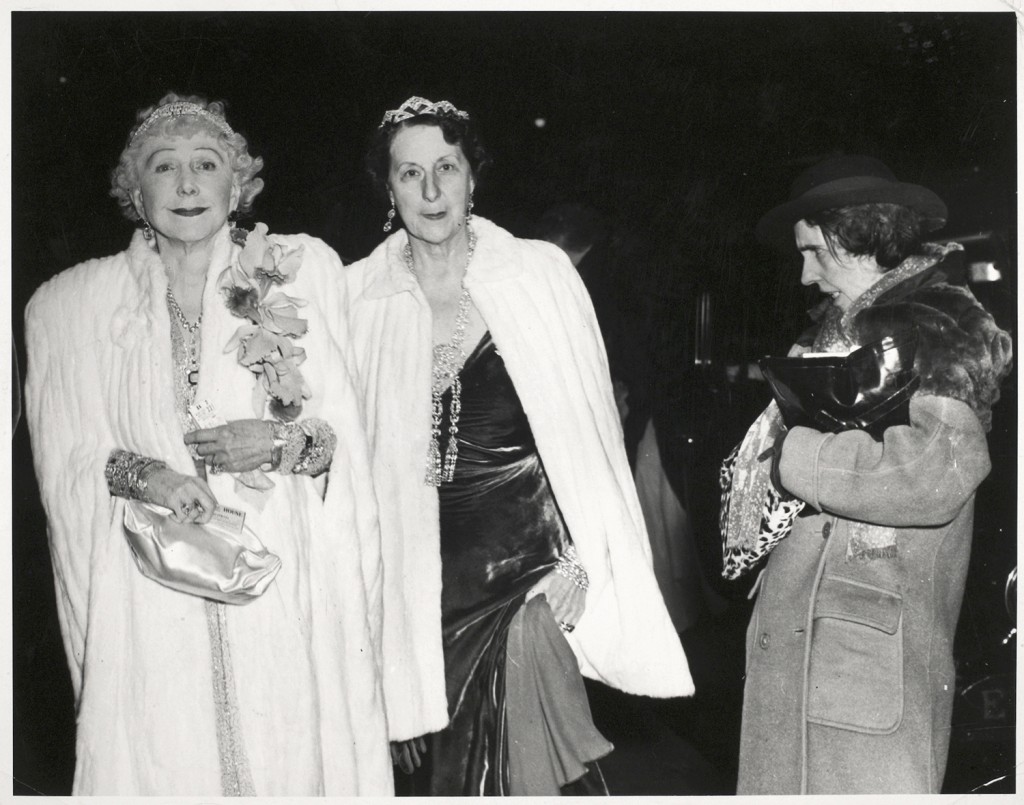 The Critic, which was staged with a drunk from Sammy’s bar, 1943. Pic by Weegee ©International Center of Photography.

Even his most popular photograph was a set-up, says Wallis: “The Critic, which was taken in 1943, was surely staged and shows the wealthy Mrs George Washington Cavanaugh and Lady Decies arriving at the opera, greeted by a staggering drunk who seems to be mocking them and who Weegee reportedly rounded up at Sammy’s bar on the Bowery.

“This picture is a good example of how Weegee previsualized a scene, developed a punchy satirical narrative, and staged the picture. The Critic was widely reproduced at the time, and even shown at the Museum of Modern Art.”