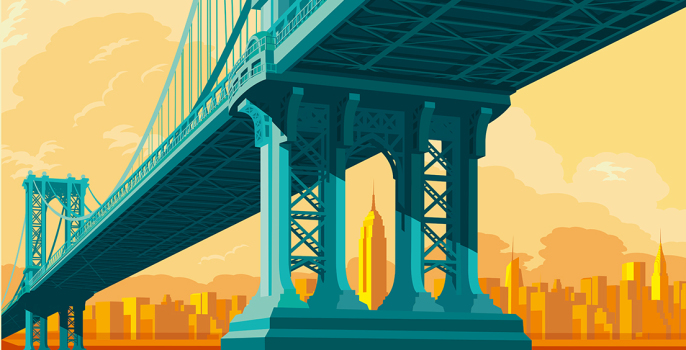 on March 2 | in Culture | by Boo Paterson | with No Comments

An artist whose brightly colored pictures of New York architecture have won him fans around the world has revealed how every artwork is inspired by a personal connection to each of the buildings.

Netherlands-born Remko Heemskerk first moved to Manhattan when his wife got a job at the UN three years ago.

After working in advertising as a graphic designer and art director for 15 years, he decided to take a sabbatical when he arrived in Greenwich Village, rethink his career and start drawing again. 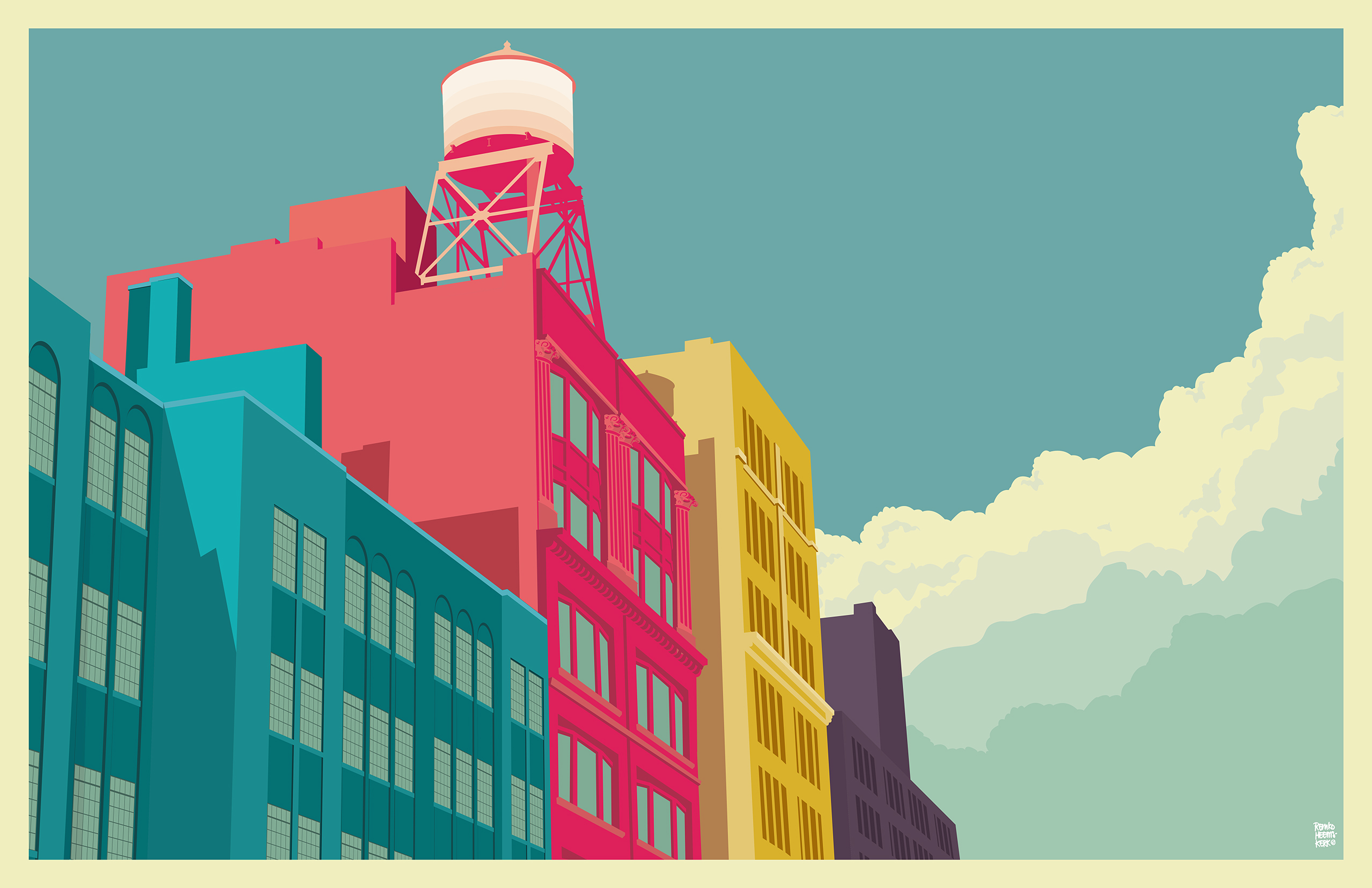 It was then that he started creating his block-color works of streets and places – but he would only depict those that meant something to him and his wife.

He said: “Every illustration has a personal story for us. East 10th Street was the street where we lived. When I was smoking out of the window I saw basically that picture.

“Every morning my wife and I walked to our work places. At a specific crossing on Park Avenue we kissed each other goodbye, while facing the Chrysler Building, which was beautiful highlighted in the morning sun. 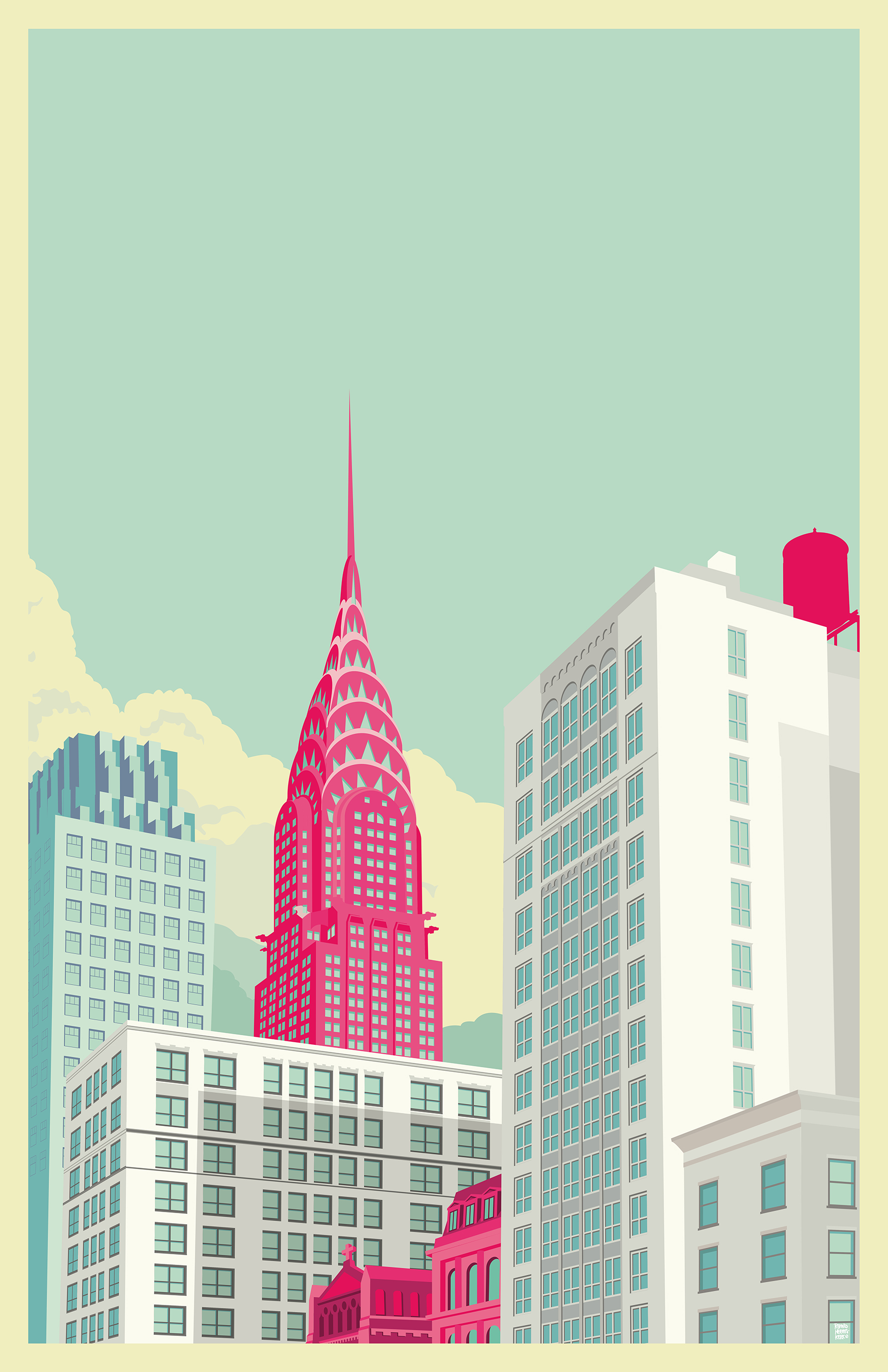 “My wife worked in a building next to the Chrysler on the 9th floor. When I visited her I was staring at it through the window always thinking: I have to draw this one, all those details, those lines, they’re fascinating.”

“And on the Lower East Side, the Bowery to be exact, there’s a large stencil by the street artist Shepard Fairey, called Obey.

“As we saw this artwork we knew that we had to go into Rivington Street because we were in the neighborhood of our favorite pub, the Hair of the Dog, on Orchard. So, for us, Obey is a gateway to the Lower East Side with cheap beer and good snacks.” 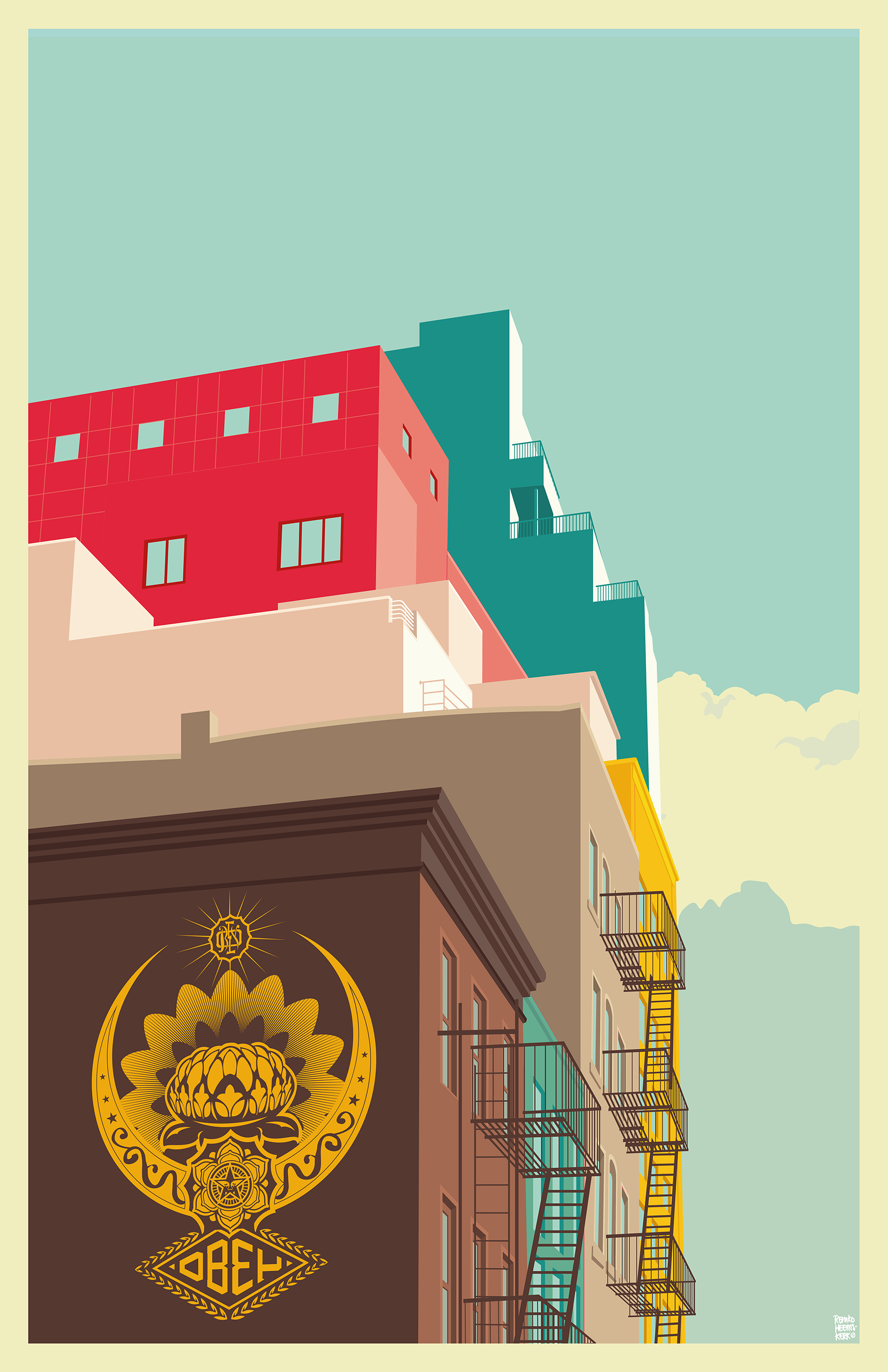 Heemskerk sketches ideas on paper before transferring these images to Adobe Illustrator and Photoshop. And all of his New York works seem to have a building, or an aspect of a building, highlighted more than the rest, drawing the eye to it.

The artist says this is deliberate. “I had that idea for a long time. Some buildings are so grey and boring that I can’t see them without color. I always say that my artwork is pure architecture but the color represents the vibe and the people in the city.

“A striking composition is more important than reality. I like to change the real world. Sometimes I put photos in Photoshop and copy and paste everything until I have the perfect picture. Those files can be a basis for an illustration file. But even then, I change everything in Illustrator. 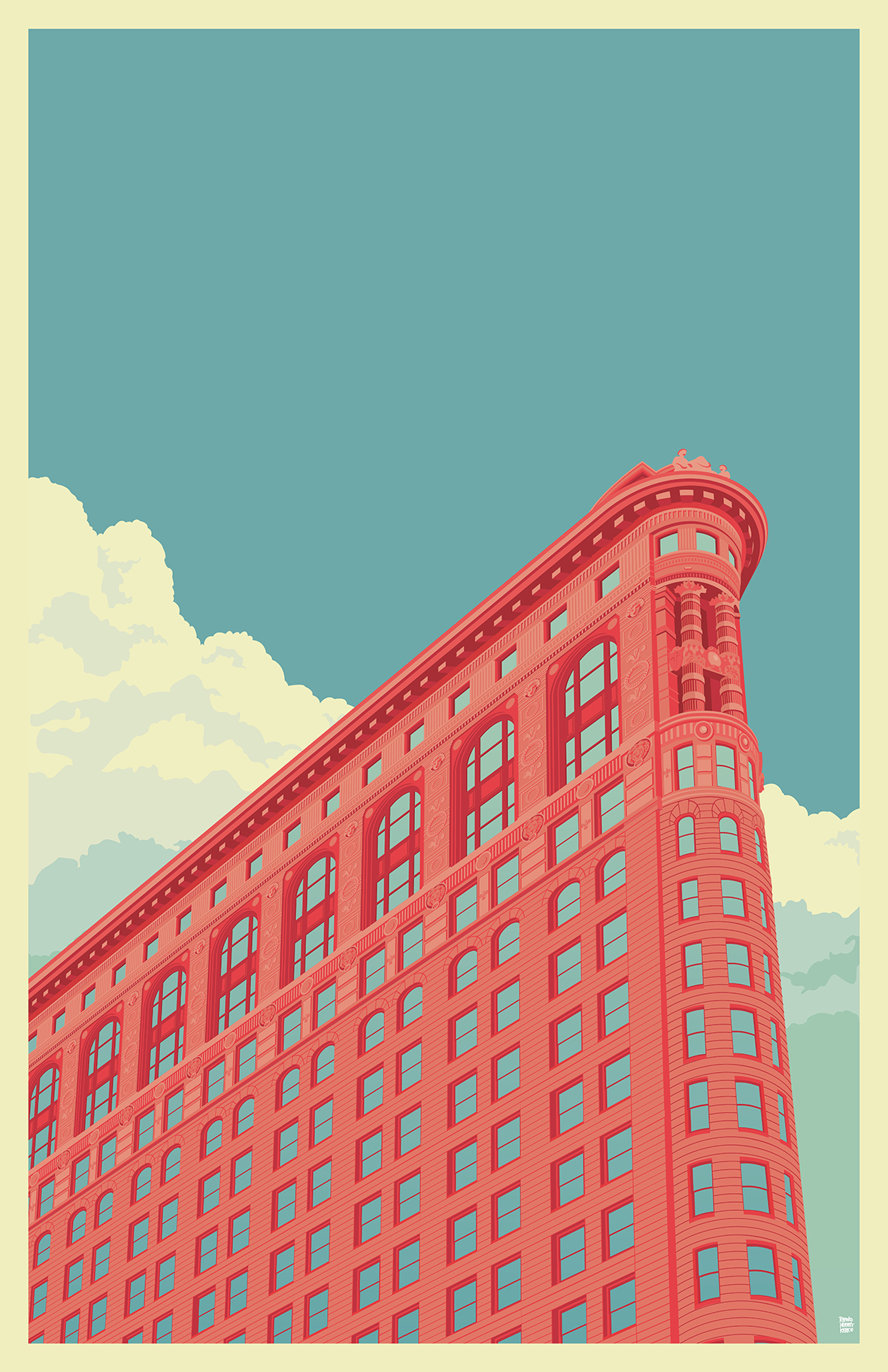 “Sometimes the perspective isn’t right. Or the shadows don’t fit. That is just what I like about being an illustrator. I’m playing God and creating my own world.”

That self-created brightly colored world has seen the popularity of his work take off, with NYC & Company recently hiring him to design the beautiful vintage-style posters encouraging New Yorkers to visit their own city as tourists.

Now residing in Haarlem in the Netherlands, Heemskerk continues to create his New York artworks from the many photos he took during his time there. But it’s clear that he still has an affinity for Manhattan. 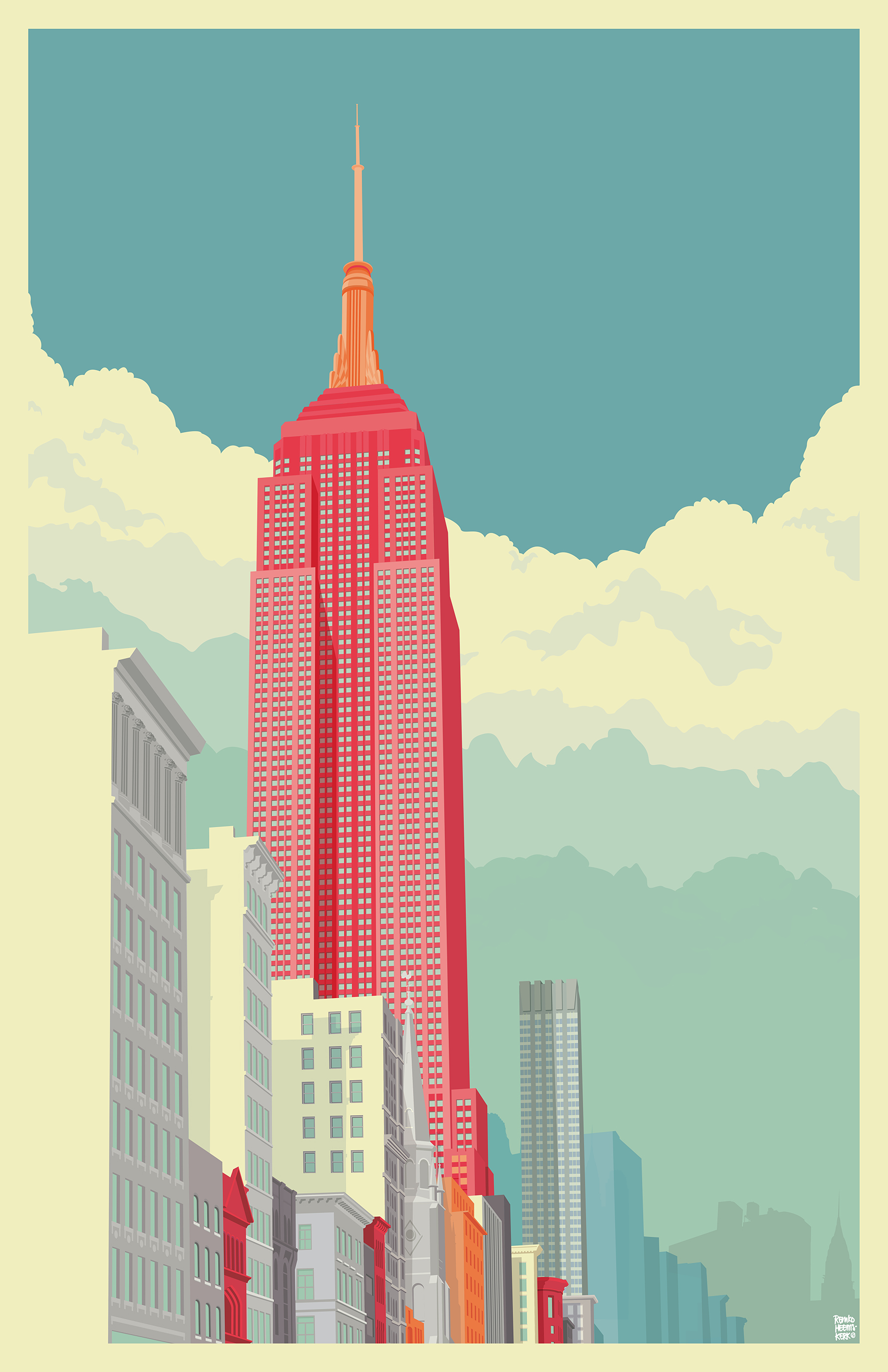 He says: “I was born and raised in a small town in the Netherlands, which was so quiet and peaceful that I got stressed out. I don’t know why it is, but I sleep better when there are fire trucks driving through the streets with loud sirens.

“NYC is the most filthy city I’ve ever seen – the most chaotic too. It is noisy and crowded, you’re never alone, even when you’re in your own apartment, but I love it. I love the high-rise buildings, the long avenues, the people. It never stops, there is always more.” 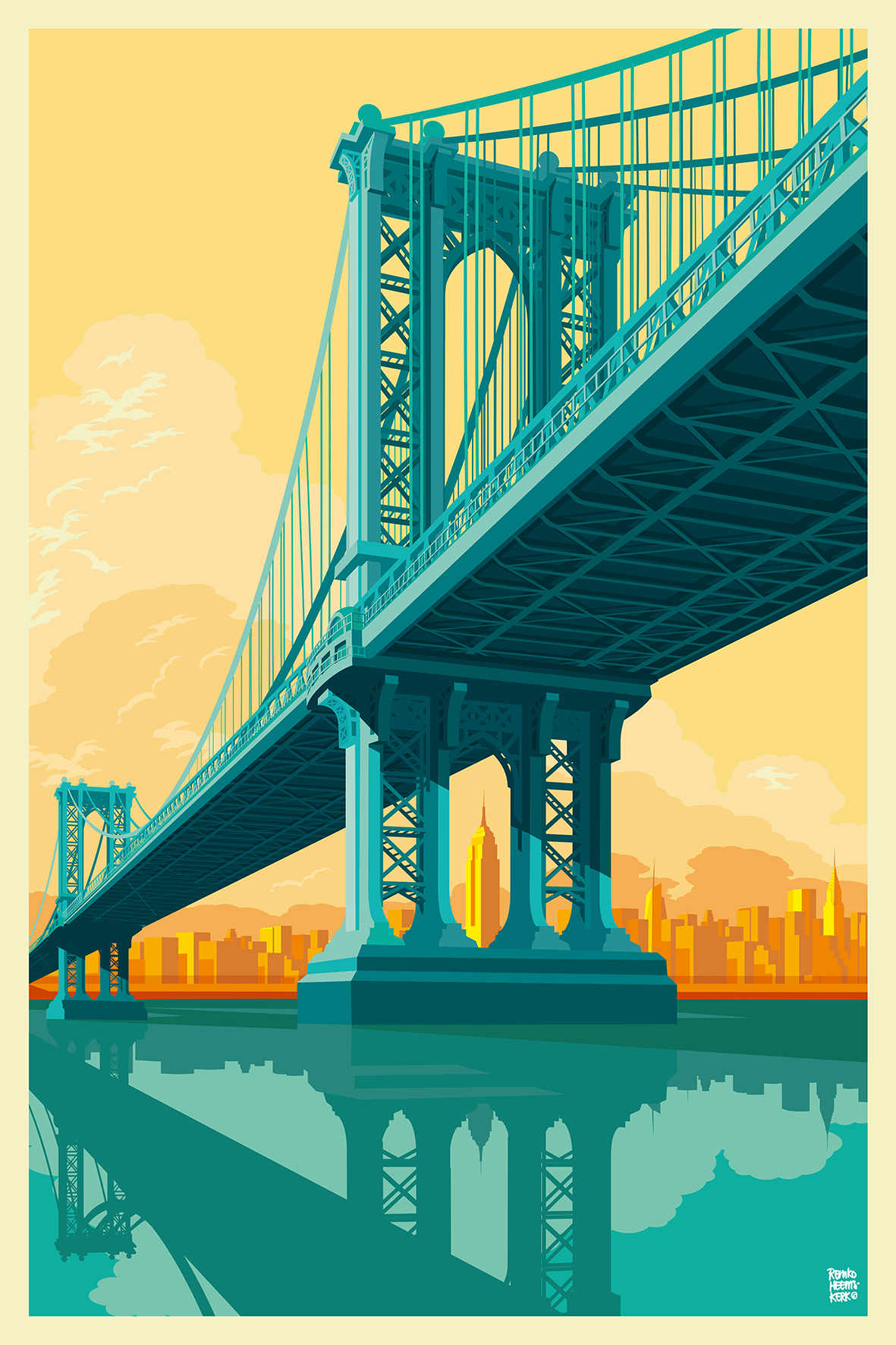